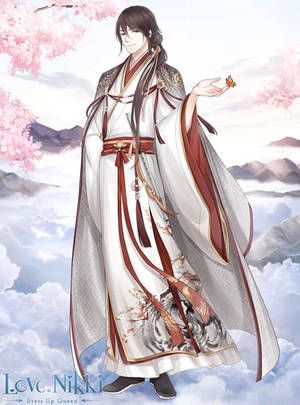 Head of the Phoenix Clan

Flight of the Flame-Feathered Phoenix

World in a Game

Zhu Yuxian, also known by his alias Zhan Qiuming, is a character in Love Nikki. He is the head of the Phoenix Clan, one of the Four Clans of Cloud.

Zhu Yuxian has straight waist-length brown hair that is pulled into a ponytail, which hangs over his left shoulder with bangs falling onto his face, brown eyes, a long white gown with red and gold trim, and black shoes with white sole. He carries a flute with him everyday, which carries a sword made by Ming Shuiyuan hidden inside it.[10] He has a small scar on his fingertip from when he once tried to make her a kite.[11]

As Zhan Qiuming, he wears a lifelike black-and-white mask that hides his true facial features.[12] His hair is long and black, and he wears fur-lined black and white robes with gold embellishments.

Zhu Yuxian has a confident demeanor and is easygoing with a sense of humor. However, despite this, he learned from a young age when his parents died that he could only truly trust himself, and viewed his love for Ming Shuiyuan as a weakness.[9] He is extremely ambitious, and he has a deep desire to tear down Cloud and rebuild it from the ground up.

Zhu Yuxian grew up in prosperous Southern Cloud and lived a carefree life. He was clearly loved dearly by his parents. One of his fondest memories from this time was of his mother playing him a song on her guqin as he fell asleep.[9] His father proudly called him the "Vermillion Bird", a reference to their house's corresponding symbol.[6]

When Zhu Yuxian was a toddler, his father gave him half a jade pendant. Zhu Yuxian, who was already knowledgeable about precious stones even at a young age, could tell that the pendant half wasn't worth much even though it was old. His father revealed that the pendant was a token that was shared between their ancestor and the first emperor of Cloud. He explained that the prosperity of Cloud wasn't just due to the royal family, but also due to the Zhu family, and so the jade half represented half of their country. Though Zhu Yuxian didn't entirely understand the lesson at the time, his father instructed him to keep the pendant and to work hard.[6]

When Zhu Yuxian was ten years old, his parents passed away unexpectedly. They left on a trip during the winter, promising to be back before the New Year and imploring him not to forget his schoolwork. However, that was the last time he saw them before their death. Their cause of death was not revealed to him.[6]

Zhu Yuxian was left as the head of the clan. The situation in Cloud immediately became unsteady, as people began to covet his position, and the thirteen rebel cities his father had worked to reclaim showed signs of restlessness. There was an expectation that he would be killed or removed from the position. However, defying everybody's expectations, Zhu Yuxian remained the family head and brought the Phoenix clan back to its previous power.[9][6]

Zhu Yuxian worked hard to find answers as to why his parents had died, playing life and the people around him like a game of Go. He realized that the emperor that his father had been loyal to had begun to fear his power. However, he also felt that Cloud was weak, and that overall weakness had killed his father.[6]

Ming Shuiyuan, a talented inventor, came to the Phoenix clan's territory in Southern Cloud to help Zhu Yuxian restore the family vault, the Mansion Voyage Moon. Though she initially had no interest in talking to him, Zhu Yuxian found her fascinating and wanted to find out what could make her happy. She only seemed to have an interest in finishing the vault.[9]

However, Zhu Yuxian was very hospitable to her. He always took her own preferences into account; he noticed immediately when she didn't like the tea he made her, and took her to do something else instead.[13] He even made her a kite, though he injured his finger in the process. Ming Shuiyuan, realizing he had made it himself, accepted the gift.[11]

The last night before she returned to Northern Cloud, they simply sat together in peace while he played the song his mother had played for him on his guqin for her all night.[9]

Zhu Yuxian met Xiao Zong in the Flower Field during this year while traveling, and the two formed a strong bond. Their meeting was described as similar to how "heroes [meet] in legends", and together they often played go. Xiao Zong gave Zhu Yuxian a pair of silver orioles which could be used as messengers.[14][15]

Zhu Yuxian did not see Ming Shiuyuan for five more years, until the ceremony of the Ming clan head, and when he did they simply greeted each other in their roles of clan heads. He didn't formally present her with a gift like the other clan heads, but instead he left her a box containing a compass.[9][16]

During this year, Zhu Yuxian and Bai Yongxi played a game of Go together on the eastern coast. Zhu Yuxian hid his true identity as the king of South Cloud, so Bai Yongxi assumed he was just a ranger.[17]

During this year, Zhu Yuxian assisted Nidhogg with his takeover of Cloud City by intercepting intelligence for him, which resulted in destruction and the death of the chief designer Lunar.[18]

He also went through the process of erasing his feelings with Xiao Zong. In the Mansion Voyage Moon he and Ming Shuiyuan had built nine years before, he declared that he didn't care about anything but himself and that the Mansion Voyage Moon would have to be sacrificed for him to succeed. He burned down the vault along with all the memories of himself and Ming Shuiyuan, declaring that the Phoenix would be born again from the ashes.[19]

Zhu Yuxian invited Bai Yongxi to play a game of Go on Mount Tai Chi.[20] He was surprised to see Bai Yongxi actually turn up, but regardless, they began a game of Go in the ruined temple.[21] There, they discussed the future of Cloud,[22] the Blood Curse,[18] and their encounter three years previously.[17] Though Zhu Yuxian had criticisms for how Bai Yongxi was running the empire, he believed that he wouldn't let another tragedy like the one that had happened in Cloud City happen again.[22][17]

During the game, a massive thunderstorm began, but the two men played on. Bai Yongxi was near to losing, but as he set down his last piece, Zhu Yuxian declared him the winner and got up to leave. Right as Zhu Yuxian left the mountain, the sky cleared up and the sun appeared again.[23]

While Zhu Yuxian and Bai Yongxi were on the mountain, thirteen cities along the southern border of Cloud rebelled.[1] They managed to advance to the gates of the city in only three days and breached the city walls the night before he returned, emptying the Phoenix Clan's palace.[24]

With the Phoenix clan falling out of power, Zhu Yuxian instead infiltrated a clan in the North, the Zhan Clan. They rose to power quickly, taking away much of the support that the Ming Clan had.[25] Under the name Zhan Qiuming, Zhu Yuxian became the new leader of the clan, even though the previous one was still fit to lead. He sent all the most important people in Cloud an invitation to his inauguration, including Ming Shuiyuan.[26]

The inauguration was a place of networking and making new connections. However, one old connection, Ming Shuiyuan, was too familiar with Zhu Yuxian's mannerisms to fall for his disguise.[7] She repeatedly tried to speak with him about it, though Zhu Yuxian attempted to distract her with dancing.[11] When he had no choice but to speak with her, he requested to speak with her later that night because nobody else there knew he was Zhu Yuxian.[27]

They met at the Ripple Yard, and Zhu Yuxian spoke to Ming Shuiyuan more candidly about the future of Cloud Empire. He expressed his dissatisfaction with the fact that the current Cloud Empress was just a six-year-old puppet, and asked her to join him, with the added threat that if Cloud Empire crumbled then her clan would also fall.[28] However, Ming Shuiyuan refused to do anything that would oppose the Cloud Empire. She got up to leave, telling him that she would forget the entire conversation happened and that they should never meet again.[10]

However, Zhu Yuxian did not let her leave. He sent needles raining down upon her, which her mech Xuanwu blocked for her. When the siege stopped and her Xuanwu retreated, Zhu Yuxian took out his flute, which had a sword hidden within it. He stabbed her with it, and she fell to the ground with a cry.[10] As she bled out, completely out of strength, he raised his sword again to kill her, but hesitated.[29]

In that moment of hesitation, Xiao Zong appeared, brandishing his sword and drinking. He told Zhu Yuxian that the reason he couldn't kill her was because he still had doubts. He then declared that "the game" would be more interesting with Ming Shuiyuan alive, taking her unconscious body away and leaving Zhu Yuxian in the forest.[29]

Zhu Yuxian and Bai Yongxi met up again at some point at Wenying Hall to discuss the state of the war. The two disagreed over whose fault the ongoing battle was, and discussed the true identity of the Cloud Empress, suggesting that she was not the actual empress. The encounter ended with a deal and Zhu Yuxian withdrawing his men from the battle.[30]

Zhu Ruosheng is a member of the Phoenix clan and a relative of Zhu Yuxian.

Zhu Yuxian and Xiao Zong quickly became "bosom friends" after first meeting in the Flower Field. This first meeting was said to be similar to how heroes meet in legends.[15]

Xiao Zong finds Zhu Yuxian to be incredibly unique and refreshing, exceeding all of his expectations and causing him to finally leave the Flower Field after many years.[14] They drank and played go together, and Xiao Zong was surprised to enjoy even losing to him.[15] Xiao Zong also taught him how to erase his own memories.[14]

Xiao Zong also gifted Zhu Yuxian a pair of silver orioles. The pair of birds could always find each other, and they could be used as messengers.[15]

The two share a deep but complicated relationship. Zhu Yuxian wanted to enter her heart from the first time they met, while she restored his family's vault, and he wished he could take her to see the mountains or show her treasures. However, he betrayed her trust when he learned to erase his feelings and stabbed her. Though he aimed to kill her, he was unable to finish the job because, according to Xiao Zong, he still held doubts in his mind.

Despite her initial refusal, Zhu Yuxian still wants her to join his side in taking over Cloud. Though he recognizes she's stubborn, he still believes she can be persuaded, and he sets a trap in order to confront her.[31]

Retrieved from "https://lovenikki.fandom.com/wiki/Zhu_Yuxian?oldid=145114"
Community content is available under CC-BY-SA unless otherwise noted.