Love Nikki-Dress UP Queen! Wiki
Register
Don't have an account?
Sign In
Advertisement
in: Characters, Recurring Characters, Females,
and 3 more

祝嘉南（キャラクター）
Zhu Ruosheng, also known as Musika, is a character in Love Nikki. She is the military advisor of Lor River City, a member of the Yue Army, and an advisor to the Tiger Clan. She is also a member of the Phoenix Clan, one of the Four Clans of Cloud.

Zhu Ruosheng has long black hair and pale amber eyes. She wears a blue and white hanfu, and a blue ribbon ties up her hair.

Zhu Ruosheng takes her duties as an advisor very seriously, feeling immense guilt over the fall of Cloud City.[3] She is also extremely loyal to her best friend Yue Qianshuang. Though her temperament is quiet, she often smiles in a mysterious and cunning way. She has been shown to be very studious and intelligent, reading through the entire Cloud History as a child and beating the national go player when she was only twelve.[10] She loves bean jelly and gourds.[1] She can also compose music.[8]

Zhu Ruosheng has proven herself as being very studious from an early age. At only twelve, she defeated the national go player, Bai Yiyue, and at sixteen she passed the highest imperial exams after reading the history of Cloud. She subsequently joined Yue army.[10]

Zhu Ruosheng met Nikki and her friends shortly after the time of Lunar's death and the fall of Cloud City. Being the military advisor of Lor River City, she was there with Zhong Lizi while Nikki was passing through. They discussed the situation together, with Zhu Ruosheng explaining that the situation had developed yet Huo Qizhou refused to budge on his own plans.[3]

Outside Brocade City, Zhu Ruosheng and Yue Qianshuang fought together against an elite force prepared by Zhu Yuxian. When it seemed they were losing badly, Yue Qianshuang barely conscious from loss of blood, Zhu Ruosheng tried to convince Yue Qianshuang to pull back, saying that they didn't need to fight anymore and that they had made it far enough. Yue Qianshuang decided to make a final charge, but was captured by chains and subsequently saved by Ming Shuiyuan.[2]

Yue Qianshuang and Zhu Ruosheng are best friends and they fight in the war together as partners. Zhu Ruosheng joined Yue Army after passing the highest imperial exams.[10] They also spend time together outside of a military context, taking the time to celebrate the New Year together one year in Cloud Capital.[1]

Zhu Yuxian and Zhu Ruosheng are both from the Zhu or Phoenix clan. It is unknown what their relationship is like other than that.

However, Zhu Ruosheng is shocked to learned that Zhu Yuxian had hidden an elite forces outside Brocade City. It is unknown how she reacted when the Zhu clan fell out of power and if she even knew that Zhu Yuxian was disguised as Zhan Qiuming as well as the mastermind of everything that happens in Cloud Empire.

The character 笙 (shēng) in her given name in Chinese means "reed pipe", and is likely the reason for her nickname "Musika". 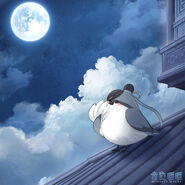 Zhu Ruosheng as a bird for "Garden Secrets 3"