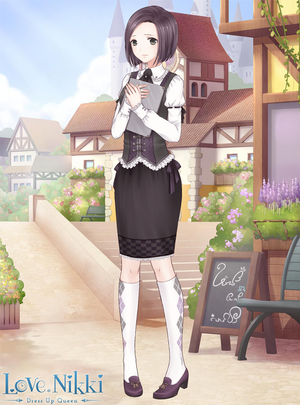 Yvette is a character in Love Nikki. She is a stylist that worked as the personal secretary of Nidhogg, the Prime Minister of the Lilith Kingdom.

Yvette is a shy-looking young woman of average height, with grey-green eyes and purple-brown hair. Her dressing style tends to be very elegant and professional, though in one occasion she puts on more revealing military clothes at Nidhogg's request.

Yvette is a faint-hearted, hardworking employee of Nidhogg. She is very timid and shy, but also very naive, sweet and caring. She has an interest in reading, listening to music and flowers. On the other hand she dislikes coffee, carrots, and ghosts.[3] Though she doesn't work as a designer, designing is one of her hobbies.[7]

Yvette never knew her parents. Her mother fell in love with someone and left when she was young, leaving her with her grandmother, who devotedly took care of her.[8]

In her childhood, she was bullied by the other children for being an orphan, especially by a girl named Lori, who always had nicer dresses than Yvette's homemade clothes. While she was alone, she found a magic wand designed by her mother in the attic. Though she did not understand how it worked, it once helped to scare her bullies.[2][9] She kept it until she was an adult, even though her grandmother told her she didn't need her mother.[8]

For her sixth birthday, Yvette was given a magic book from her grandmother, which had been passed down through her family. It was said that only the purest children could discover the secret of the book, which was an elf known as the Illusion Elf within the book. He appeared in front of her and introduced himself as Ryan, and offered his help so that she could become stronger.[4]

Even though Yvette could see Ryan, nobody else can. He told her that if she became strong enough, she could summon the Dream Light Array and bring him into the world for everyone to see.[10]

After spending five years with Ryan, Yvette found one day that he was becoming transparent. Though she was sad, he assured her that it was normal and just meant she was growing up.[11] Her grandmother told her that growing up was like filling a blank piece of paper with more colors: still beautiful, but no longer pure.[12]

By this year, Ryan had grown nearly invisible, though Yvette could still hear him. He explained to her one day that he was going to disappear completely soon, and she became angry at him for leaving her. Ryan did his best to assure her that he'd be with her even if she couldn't talk to him, and promised that one day she could summon him if she was strong enough. As he said goodbye to her, she promised to him that she'd be the best grown-up.[13] She told her grandmother of her desire to summon him again, and her determined attitude rather than being overtaken by sadness impressed her grandmother.[14]

Yvette became a student of Cicia Design School during this year, barely passing the entry tests. Though she wished she could have done better, she understood nobody could be perfect all the time.[14]

In her second year of school, she was able to summon Ryan again using the Dream Light Array. Though their tearful reunion only lasted for a few minutes, Yvette felt encouraged by her ability to work towards a goal despite her ordinariness.[15]

After graduating, Yvette quickly became Nidhogg's personal secretary against all odds. Her sister Kiki was surprised to hear this, given that it was considered a role many girls would love to have, and Yvette was inexperienced. Yvette herself admitted that she did not feel ready for the role, but she resolved herself to do her best.[16]

Her first day of work was a disaster: she took the wrong files, got the time of a meeting wrong, broke the printer, and spilled tea on an important document, as well as her clothes.[17] Yvette went to the stairwell to cry, and wondered if being a secretary wasn't right for her after all. Nidhogg came and summoned her to the lounge. She expressed concern that he would fire her, but he didn't. Instead, he told her she could borrow a dry uniform and told her that her image would be very important in the future.[18]

A month later, the office cleaner mentioned to Yvette that Nidhogg had been meeting more and more with strange guests, having top-secret meetings and not allowing his office to be cleaned. Yvette admitted she hadn't noticed anything herself about such a thing.[19]

Later, her birthday passed and she went to work on that day only to find that Nidhogg was not there. She went into his office, where she saw a box on the desk with a card with a mercenary's logo on the top. She reached for the card, but Nidhogg came in and interrupted her, asking her what she was doing. Startled, she spilled coffee all over it. The box fell onto the floor, and a stuffed rabbit came out of the box. Nidhogg revealed that it was her birthday gift, and that it was called the March Hare, supposedly because she was born in March.[20][21]

Yvette loved the rabbit, and talked to it all day, since she didn't have anyone else to share her thoughts with. When she went to sleep that night, the bunny appeared in her dreams. It told her that it could communicate with her this way, and that it was here to help her with styling.[21] It talked with her all night, causing her to be tired the next day. Nidhogg noticed and told her that the bunny was not that good at styling, and that she could throw it out if she wants to.[22]

Despite this, Yvette treasured the rabbit. She made an outfit for it featuring a golden pocket watch, a monocle, and a top hat, inspired by Nidhogg, and submitted it for the Citizen Design Award at the suggestion of Locco. It won, and she was embarrassed by all the attention.[23]

Yvette and Nidhogg attended a conference together in Cicia during the year in 680 at the same time Nikki, Bobo and Momo were there. She revealed that she was his secretary to them when she ran into them, and subsequently lost a styling battle to Nikki. Nidhogg was disappointed that she took so long due to the battle.[1] The two later proceeded on to Wintermount for the Designer's Tea Party, where they spent time together in the rose garden dedicated to Nidhogg.[24]

Later in the Cloud Empire, Yvette ran into Nikki and her friends again on a cruise ship on the Celestial Lake, this time with Nidhogg with her. Nidhogg proposed another styling battle between the two girls, which Yvette lost again.[25]

Yvette assisted Nidhogg with the preparations of the Fantasy Styling Contest in Royal City, which he hosted along with Royce.[26] Shortly before the contest began, she lost the magic wand made by her mother, and Nikki helped return it to her.[27]

As the contest began, Yvette noticed the abnormal presence of North soldiers attending. Unaware of Nidhogg's plans to lead them in rebellion, she was confused as to why he kept sending her away. Darkness fell, and the Fantasy Styling Contest turned into chaos. Yvette sought out Nidhogg so that she could find out what to do, still not realizing he was the cause of the chaos. He tried to send her away, but upon realizing they didn't have enough time, he told her to get in the car with him.[28]

They went to the North Kingdom via car, Yvette still confused as to Nidhogg's motivations and Nidhogg frustrated by her questions. She eventually realized what he had done and pleaded with him to go back, but he told her that they could not do anything until they reached North. He also pointed out that the people of Lilith would probably see her as a traitor and that she was likely to be arrested when she returned.[29]

He kept Yvette in a room guarded by North Kingdom guards for several days, where she grew restless. She escaped by winning a styling battle against a guard using her mother's wand.[30] Suddenly a video of her mother began to play from the wand. Her mother told her that she left because she had to do something important and that she only left so that Yvette could be safe. She told Yvette that she loved her before the video ended.[31]

Nidhogg approached her then and reassured her that he was going to send her back the next day, even as she cried for her mother. She asked him if he had been lying to her and Lilith the whole time. He easily admitted that he had, and that he had chosen her as his secretary in order to give himself a better image. However, he reassured her that he wouldn't hurt her, to thank her for her years of shielding him. She told him that she understood, even though she was still crying.[32]

The next morning, Nidhogg sent Yvette home with one of his trusted followers. Before she left, she formally accused him of violating several articles of Lilith and bravely told him that the seven nations would arrest him. He just smiled and said that she ought to go before she cried again. She took one last look at him before leaving.[33] On the car ride home, she cried while thinking about both Nidhogg and her mother. She fell asleep then, and dreamed of her mother, who suggested she start over and get a job in a clothing store. Despite all she had been through, Yvette felt a glimmer of hope for her future.[34]

Yvette works as Prime Minister Nidhogg's personal secretary. She is not very good at it, both in administrative duties and in fashion duels. She is shown to have mixed thoughts on him: on one hand she doesn't like it when he teases her (which he does, and a lot), but on the other she strongly admires him for his dedication and talent. She relies on him a lot and struggles once she finds herself alone.

Nidhogg is a very strict boss. However, he doesn't apply this as harshly to Yvette, though he scolds her verbally when she messes up, polices how she dresses, and sometimes teases her about her liking him.

It is strongly implied that Yvette did fall in love with Nidhogg, or at least the version of him before he betrayed her and the Lilith Kingdom. She compares him to the man her mother fell in love with, who was also said to be a bad person.[34]

Kiki is a businesswoman from the Lilith Kingdom and Yvette's older sister. She's an outspoken and kind woman who cares a lot for her younger sister and worries quite a bit for her sake. She has short, dark hair like Yvette, though hers has blue streaks which she dyed in order to look different.[5]

When Yvette was taken by Nidhogg after the Fantasy Styling Contest, a very worried Kiki contacted Nikki, Bobo, Ace and Momo before they took off to the Republic of Wasteland and told them what she knew about Yvette's bonds with Nidhogg and the March Hare that he gave to Yvette.[35]

Yvette with Agata, Shade, and Ming Shuiyuan
Add a photo to this gallery

Retrieved from "https://lovenikki.fandom.com/wiki/Yvette?oldid=109524"
Community content is available under CC-BY-SA unless otherwise noted.