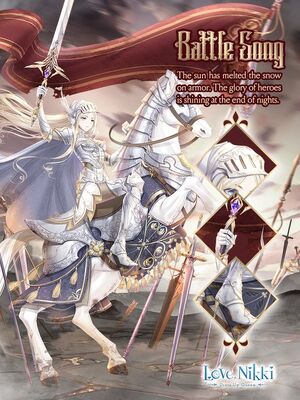 Yunikina is a character in Love Nikki. She was a general and a revolutionary from the North Kingdom.

Yunikina had long blonde hair and blue eyes. The suit of armor she wore, Icewind Warchant, includes a silver dress and boots, stockings, a helmet, and gloves. She also wielded a sword and had a horse, Grani, as her companion.

Yunikina was fearless and daring. She held a deep love for the North Kingdom, and she missed her destroyed hometown dearly. The combination of these factors gave her the courage and willpower to stage an uprising against the lord of White Rock City.

Yunikina was born in a small village. However, she moved thousands of miles to White Rock City at some point, and the village was reduced to rubble during the war.[2]

Yunikina served as the youngest second lieutenant for the lord of White Rock City. He assigned her to supervise a musician named Eagle, who the lord viewed as a threat. Yunikina's supervision prevented him from leaving his house, and nobody came to listen to his music anymore. Yunikina was surprised by how he accepted this, and he continued to sing and play his zither. Listening to his music made her think of her now-destroyed hometown, and brought tears to her eyes.[2]

At some point Yunikina and Eagle became lovers. However, she did not want him to become associated with the revolutionary force against the lord of White Rock City. She told him with tears in her eyes, "You are truly talented. Don't talk to the Revolutionary Party. Don't destroy yourself." Despite her advice, Eagle's music became a song of liberty for the people. He was taken and killed by the secret police during the night.[2]

Yunikina went into his house after he was taken, and found the designs for her war outfit, Icewind Warchant. He had written, "Dedicated to Yunikina and our snowy plains." She became angry because writing something like that was risky given the massive target on him. Just then, someone knocked at the door of his house. She realized she was in danger, and hid in a bookcase with her pistol. She was talented, and managed to escape. At that moment, she became an enemy of the lord and part of the revolution. She considered apologizing to the lord to gain her honor back, but realized she had done nothing wrong.[2]

Word spread that he was missing, and people began to lose hope. Yunikina took the opportunity to do what he would have wanted, and started the Snow Eagle Revolutionary Force. She published Eagle's last poem and how he died with the help of his comrades. The lord summoned North Kingdom's army to stop the revolutionary force, but Yunikina and the Snow Eagle Revolutionary Force prevailed, and she brought freedom to the people. She never cared for fame or prestige, only wanting liberation.[2]

It was said that when she died, she was buried with Icewind Warchant under the frozen fields of North.[1]

Yunikina and Eagle both inspired each other: Eagle's music inspired Yunikina to turn against White Rock City's lord and reminded her of her homeland, and Yunikina inspired Eagle to create a design in her honor. Thus, despite being positioned on opposite sides initially, the two formed a bond.[2] Cali, a reporter from 680 who was interested in their story, referred to Yunikina and Eagle as lovers.[1][3]

Retrieved from "https://lovenikki.fandom.com/wiki/Yunikina?oldid=142269"
Community content is available under CC-BY-SA unless otherwise noted.