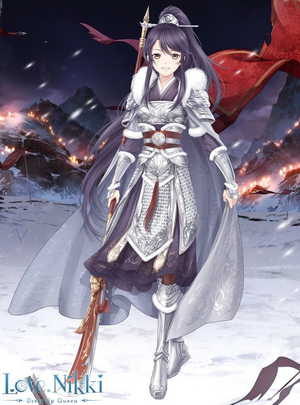 Head of the Tiger Clan

Yue Qianshuang is a character in Love Nikki. She is the leader of the Tiger Clan, one of the Four Clans of Cloud.[5]

Yue Qianshuang has dark purple hair, nearly black, with even parts falling on either side of her face and a tall ponytail on the top of her head. She wears shiny silver armor with a purple dress beneath.

Yue Qianshuang is lively, cheerful, optimistic, straightforward and loyal. She always has a smile on her face and bravely fights in the war.

Though she has designed clothing, Yue Qianshuang is best at designing weapons.[3]

Yue Qianshuang was close to her uncle growing up, and he served as her teacher on topics ranging from combat to armor design.[3]

During this year, the Nine-Day War broke out, and Yue Qianshuang and her uncle went on a mission to bring the treasures of the Cloud Empire to Rolterdan. However, the journey was dangerous, and her uncle was one of six people who died before they reached their destination.[3]

Though she was only ten, the clan elders were unable to find her another teacher. However, Yue Qianshuang felt that her uncle's final lesson had been taught with his death. As was tradition on New Year's Eve, she lit a lantern for her uncle to represent his heroic spirit, and released it into the air.[3]

Yue Qianshuang was granted the position of the leader of the Yue clan between the ages of ten and eighteen.[3] She also met Zhu Ruosheng, and they became close friends. Yue Qianshuang allowed Zhu Ruosheng to join the Yue Army after passing the highest imperial exams.[6]

Following the attack on Cloud City and the alliance between the Apple Federation and League Tyr, Yue Qianshuang assembled the warriors of the Yue Clan to prepare for battle.[3]

Yue Qianshuang and Zhu Ruosheng were in the middle of a grueling fight outside of Brocade City one New Year's Eve. Zhu Yuxian had snuck forces into the Cloud hinterlands, and they couldn't get reinforcements. The enemy started to use flaming arrows, and everything felt hopeless. Bravely, Yue Qianshuang rode into the line of fire.[7]

Suddenly, Yue Qianshuang fell off her horse as she was pulled back by a chain. As she became restrained, she started to lose consciousness. She gave one final order to her forces to turn back, but they ignored her and began to charge as she finally began to lose consciousness. Ming Shuiyuan appeared then with her Black Tortoise mecha and freed Qianshuang, carrying her to safety as her soldiers watched in awe.[7][8]

Yue Qianshuang and Zhu Ruosheng are best friends and they fight in the war together as partners. Zhu Ruosheng counseled the House of Yue, and together they defeated savages, jailed bandits, and won the West.[5] Zhu Ruosheng joined Yue Army after passing the highest imperial exams.[6]

They spent one New Year's Eve together in Cloud Capital, where they watched fireworks together and purchased paintings from street vendors.[9] They also fought together in the Snowfall Hills outside Brocade City, with Ruosheng serving as her advisor.[7] Through both of these instances, it's clear that the two of them share a deep connection, as they're willing to confide in each other and fight for each other. Yue Qianshuang also jokes on one instance that if dating can be described as dining, shopping, and touring together, then she and Zhu Ruosheng have been dating for a long time.[10]

Retrieved from "https://lovenikki.fandom.com/wiki/Yue_Qianshuang?oldid=145111"
Community content is available under CC-BY-SA unless otherwise noted.