Yoyo, also referred to as Sister in Nikki UP2U and Nina in Hello Nikki-Let's Beauty Up, is Nikki's sister. She was close with Nikki and Momo on Earth, but she did not travel to Miraland with Nikki.

Yoyo has straight, waist-length dark purple hair and dark blue eyes. She has an elegant manner and wears a simple purple dress lined with lace. Nikki depicts her with purple hair as well in a drawing.

In Nikki UP2U, Yoyo instead has wavy blonde hair, and pink eyes similar to Nikki's.

In Love Nikki, Nikki describes her as kind, caring, and reliable.[3] In Nikki UP2U, Yoyo is shown to love shopping more than even Nikki, and she constantly drags Nikki off to go buy clothes with her.[1][4] Yoyo and Nikki also work out together.[5]

Yoyo invited Nikki to go to a costume party with her, and asked her to help her pick out an elegant dress, confusing Nikki since it didn't fit the theme of a costume party.[1] They had trouble finding something suitable in a store, so Yoyo took Nikki to a designer and explained the situation to him.[6]

They came back a few days later on the night of the costume party only to find the studio empty and messy. Worried, Yoyo and Nikki went to the roof and found the designer, who admitted he was suffering from a lack of inspiration. However, he asked for Nikki to put on a European-style dress, which helped him get his inspiration back.[7]

At the costume party, Yoyo was annoyed that Nikki got all the attention despite the fact that Yoyo had been invited and not her. Nikki suggested that they go to thank the designer, and Yoyo reluctantly decided to go since she was "such a grownup".[8] When they arrived at his studio, though, he was having a breakdown because one of his models for an upcoming competition hurt her ankle.[9]

As soon as the designer saw Nikki, he asked her to be his model instead. Though Yoyo was jealous, wondering aloud why things like this never happened to her, she encouraged Nikki to go try.[9] Nikki agreed, but a day before the competition, they discovered that a contestant damaged some of the clothing made by the designer in an attempt to sabotage him. What was more, the contestant now knew the theme, so they changed it to Chinese robes.[10]

Just before the competition was about to start, Yoyo asked Momo to look after Nikki for her while she went to catch the person who destroyed the designer's clothing.[11] After Nikki competed and won the competition, she tried to leave early to thank the designer, despite Momo's warnings that Yoyo would be mad.[12]

Yoyo showed up then, and though she was annoyed Nikki had "abandoned" her, she revealed that the designer wanted to thank Nikki for giving him hope and courage.[12]

Yoyo went to Lijiang, China one weekend, and Nikki decided to meet up with her by car.[13] At Lijiang, Yoyo saw Nikki and Momo and expressed her surprise and happiness that they were there too. She suggested that they go to visit Yulong mountain together the next day.[14] On the mountain, they watched the sunrise together and Yoyo suggested they have someone take a picture of the three of them.[15]

On Earth, Nikki and Yoyo traveled the world and followed their father's treasure map.[16] However, they were parted before they found him, leading Nikki to wonder if Yoyo was able to find their father by herself.[17]

Nikki and Yoyo care a lot about each other, even though they have disagreements. Yoyo looks out for Nikki, even going out of her way to find someone who damaged clothes Nikki was going to model in a design competition.[11]

While Nikki is in Miraland without her sister, she can't help but think about how much she misses her.[3] She even wishes on a star, hoping that her sister and father were okay without her.[18]

Yoyo also stole Nikki's clothing once on a trip to London, England.[19] 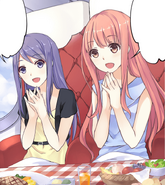 Yoyo and Nikki with their father's map[22]

Yoyo and Nikki with their father's map[22] 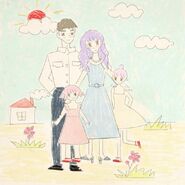 Nikki's drawing of her family. From left to right: her father, Nikki, her mother, and Yoyo.[23]
Add a photo to this gallery

Retrieved from "https://lovenikki.fandom.com/wiki/Yoyo?oldid=125028"
Community content is available under CC-BY-SA unless otherwise noted.