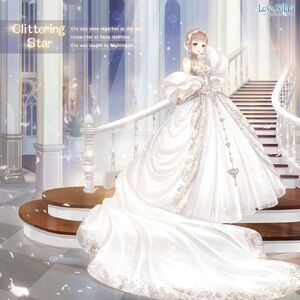 Xinglin, sometimes shortened to simply Lin or Rin, is a character in Love Nikki. Until her arrest, she was a researcher from the Rosset Research Institute. She is also the mother of Flynn.

Lin has light brown hair, worn up on her head with loose ringlets falling beside her face. The dress she wears is a large white ballgown with gold trim.

Lin was fiercely protective of the people she loved, and would go to great lengths to save them. She had a strong moral compass and turned her back on the Rosset Group as soon as she found out they were blackmailing her closest friend.

Lin was mentored by the senior researcher Nightingale and was regarded as a talented prodigy of the Rosset Group where she worked. She inspired Nightingale and they had a close teacher-student relationship. However, Lin was kept in the dark about the shady happenings at the Rosset Institute.[2][3] Lin was also a close friend of Lady Crescent, and always protected her when they were students.[1]

During this year, Lin had a son named Flynn.[1]

Lin's friend Lady Crescent fell ill with a deadly virus during this year. The Rosset Group began to blackmail her and her husband Schiller using the cure to the disease, which they had developed after stealing her blood sample. Lin, wanting to save her friend, severed her mentorship with Nightingale[2] and tried to steal the cure from the Rosset Group with Schiller's assistance.[1]

Unfortunately, Lin was caught. She was subjected to a smear campaign by the media, and even her son Flynn was hounded by journalists. She was also put into jail, but was let out on bail in time to attend Crescent's funeral.[1] At her funeral, Lin held the young Kimi.[4]

When Kimi fell into a deep sleep, to the worry of the rest of Apple Apparel Group, they contacted Lin in order to see if she had any ideas that could help wake up Kimi.[5]

Lin was Crescent's best friend and her protector. She worked as a researcher at the Rosset Institute, but turned her back on them in order to steal the medicine that would save Crescent that they were using to blackmail Schiller. However, these events landed her in jail.[1]

Flynn (who later became Shade) was Xinglin's son, and they shared a number of similarities; one such similarity was that both were very proud, daring people. When journalists attacked him to question him about his mother's act of turning her back on the Rosset Group, he simply ignored them and didn't say a word.[1]

Retrieved from "https://lovenikki.fandom.com/wiki/Xinglin?oldid=136102"
Community content is available under CC-BY-SA unless otherwise noted.