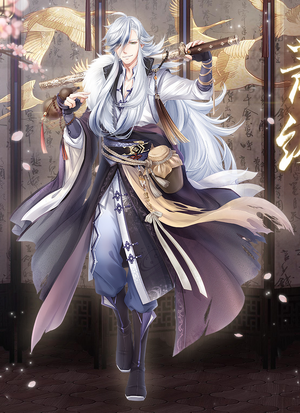 Xiao Zong is a character in Love Nikki. He is an immortal man from the Cloud Empire.

Xiao Zong has long, wild white hair with black streaks. He has a rogueish look about him.

Xiao Zong, being immortal, takes a carefree and often chaotic approach to life. However, he became bored with travelling and drinking all day, and wished for many years to be inspired by somebody and teach them. After meeting Zhu Yuxian and involving himself with Zhu Yuxian and Ming Shuiyuan's relationship, he believed that life was too interesting to give up on.[2]

Xiao Zong's immortality meant he used to spend his infinite days doing things like getting drunk and practicing swordsmanship for fun. He wandered around Miraland trying to find meaning to his life, but everything seemed the same to him.[2]

One day he met a boy in whom he saw great potential. For a long period of time, Xiao Zong tried his best to support the boy, but one day he received a letter from the boy. He had given up on life due to love, which disappointed Xiao Zong. For sixty years after this, Xiao Zong stayed in the Flower Field of Cloud, hoping he would find somebody who would inspire him. As time passed, he relied more upon material things to fill his mind.[2]

He then met Zhu Yuxian, who gave his life meaning again. Xiao Zong left the Flower Field. He tried to teach Yuxian how to erase his own memories, but he did not believe he had the potential to do it. However, Xiao Zong was proven wrong when Zhu Yuxian stabbed Ming Shuiyuan. Xiao Zong stepped in to save her, as he wanted her to continue to associate with Zhu Yuxian and tell an "interesting story".[2] After saving her, they talked for a long while, with her apparently unsuspecting of his true intentions.[3]

Xiao Zong climbed the Misty Peaks one morning, drinking, when he happened upon two soldiers. They told him he couldn't be there and one tried to stab him with his sword, but he easily deflected the attack and turned it around, killing the soldier. Xiao Zong suppressed the flare he tried to send out and told the dying officer not to interrupt, as it "was nearly time".[1]

All of a sudden, light came from the direction of Jinlin Palace and shot into the sky, indicating the Empress of Cloud performing a ceremony. Xiao Zong let out a fanatical laugh and remarked that they didn't disappoint him.[1]

Xiao Zong believed Zhu Yuxian was unique and interesting, and had "the most complex mind and the simplest feelings at the same time". They formed a friendship, which caused Xiao Zong to leave the flower field after sixty years of living there. Xiao Zong also taught him how to erase his own memories.[2]

Retrieved from "https://lovenikki.fandom.com/wiki/Xiao_Zong?oldid=104352"
Community content is available under CC-BY-SA unless otherwise noted.