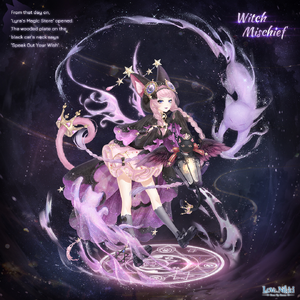 From that day on, 'Lyra's magic stone' opened. The wooded plate on the black cat's neck says 'Speak Out Your Wish'

Witch Mischief is a Lilith suit that could be obtained during the Black Cat Legend event.

It's a joke! And those people only call her name aloud when chasing her, which makes her happy.
- Lost in Dreamland

Lyra enjoys looking at those people who got tricked the most. And escaping the hunt makes her even happier.
- Naughty Joke

Why worry over such things? She then plans the next hoax.
- Witch's Prediction

The dazzling magic circle shines all over the night. Lyra is still trying.
- Phantom Neko

Until one time she failed and Lyra was changed into a black cat! Only forgiveness can turn her back into a human.
- Heart of Redemption

Carrying a light with her tail, she knocked on everyone's door. But those who were hoaxed only got angrier.
- Long Tail Lamp

The little black cat jumps onto the roof and plays with her tail for nothing. Suddenly, a wooden hut catches fire.
- Phantom Wings

The spell used for the hoax comes in handy. A cloud appears and the rain extinguishes the fire.
- Spell of Love

After making peace with all the neighbors, Lyra regains her human form. And all she hears are people's thanks.
- Rebirth Magic

From that day on, 'Lyra's Magic Store' opened. The wood plate on the black cat's neck says 'Speak Out Your Wish'.
- Witch Contract

Once a horrible bad girl, now a popular little witch. Find her and your dream will be realized.
- Witch Mischief

This suit tells the story of a witch named Lyra. Lyra is a troublemaker who loves playing pranks on others. After a magic trick goes wrong, Lyra is transformed into a black cat and must seek the forgiveness of those she wronged to turn back. Although her neighbors are unforgiving initially, Lyra eventually makes peace with them after using her magic to extinguish a house fire. After regaining her human form, Lyra starts using her magic to help people instead, opening her own store to fulfill people's wishes. 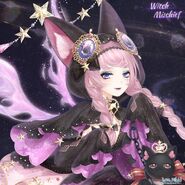 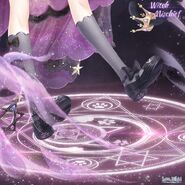 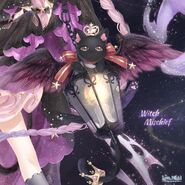 Retrieved from "https://lovenikki.fandom.com/wiki/Witch_Mischief?oldid=146227"
Community content is available under CC-BY-SA unless otherwise noted.