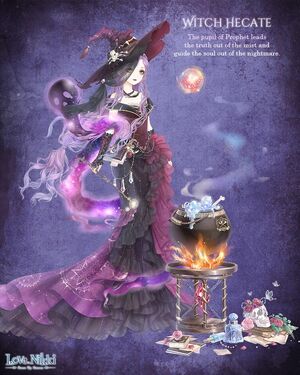 The pupil of Prophet leads the truth out of the mist and guide the soul out of the nightmare.

Witch Hecate is a Pigeon suit that appeared as a Recharge suit from December 14th to December 18th, 2017, for 1460

(currency for the Dance of Black Rose event).

If you go to the small towns near the secret mountain. The locals will warn you to stay away from the mountain.
– Purple Mist

The story of Witch is very popular nearby. Word says when the cloud hides the moon, she will haunt the lonely walkers.
– Graceful Venom


People summoned by the witch never returns. And lonely songs always come down in the full-moon night.
– Lost Dead


If the record is true, then Hecate was a common girl in the town who earned a living by making perfume.
– Queen’s Pace


You closed the book. Knowing it’s but another story, you seem to hear the song in woman’s voice from afar.
– Crooked Hat


The one imprisoned in the shadow, eyes closed, seemed to be gradually alive with the infusion of the essence.
– Blood Drop Chain


What’s the best solution? Is there even one? She never panics. She just tried to get used to the seemingly dead end.
– Diamond Staff


The souls of human are countless like flowing water. Only the time of her and him are still.
– Witch Glove


Centuries ago, for a water source, there was a small clash during which ‘several young men were lost’, so recorded.
– Midnight Fright


The books are casually scattered on the ground, whose yellowed page is bathed in the elusive aroma. ‘Immortal… Revive’.
– Rose Perfume


The witch repeatedly refined the soul, trying to purify it and infuse it into the vague human shadow.
– Samsara Obsession


I’ve lost the yesterday’s beauty. If one day you wake up, will you still recognize me?
– Sweet Demon


If you browse the dirt-covered old books in the town’s library, you will find the real name of Witch Hecate.
– Trivia

A popular folklore witch who is assumed to reside in a secret mountain, as the small towns' residents near it warn visitors to stay away. If the record is true, she once was a common girl in the town who earned a living as a perfumer. It is also mentioned that her real name can be found in the dirt-covered old books in the town's library. Word says when the cloud obscures the moon, the witch will haunt lonely passersby. People summoned by her never return. It is implied that she sacrifices those people in order to revive her lover and make him immortal. She had failed a considerable number of times but kept trying nonetheless, to the point where she never panicked and tried to get used to dead ends. Because she lost her past beauty, she also wonders if he will still recognize her. Her justification is that the souls of humans are countless like flowing water, but the time of her and his are still. She repeatedly refined his soul, trying to purify it and infuse it into a vague human shadow. With his eyes closed, he gradually became alive with the infusion of the essence. A possible theory of how he died might be from a small clash centuries ago, where "several young men were lost", so recorded.

Hecate is a goddess in ancient Greek religion and mythology, most often shown holding a pair of torches or a key and in later periods depicted in triple form. She was variously associated with crossroads, entrance-ways, light, magic, witchcraft, knowledge of herbs and poisonous plants, ghosts, necromancy, and sorcery.

There is also a character named Hecate in the Night of Starfall event. It is unknown whether or not the two are related, though it is unlikely.

Retrieved from "https://lovenikki.fandom.com/wiki/Witch_Hecate?oldid=159843"
Community content is available under CC-BY-SA unless otherwise noted.