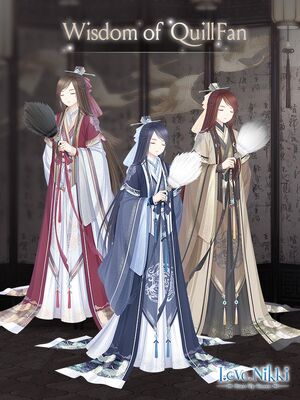 Wisdom of Quill Fan is a Cloud suit that can be obtained through evolution. It can be customized.

Feather fan in hand and crown on head, he beat foes easily. Life is only a dream. Let's toast to the river.
– Crane Fur-Epic

The world is a hotel for all life and time is a visitor. Life is like a dream. How many pleasures do we have?
– Dream Shoes-Epic

Fog Jade is exclusive to the Cloud Empire. Cloud Army hairpins, hangings and pendants are all made from it.
– Wind Jade Crown

Many in House of Zhu tend to be nomads, singers, calligraphers... They don’t love nobles or despise merchants.
– Floating Dream-Gentle

Red candles resonate with the moon, and the scarf matched the fabric. It is a pleasure to drink all night.
– Crane Feather-Gentle

Tombs and refugees, sand and darkness, war and death—rewards are afterwards.
– Dream Shoes-Gentle

Fog Jade is rare in the Cloud Empire. People indulge in the clear surface that seems to be surrounded by fog.
– Fog Crown-Gentle

I wore a crane cloak when leaving my study. The moonlight cast through my door, spilling into a silver square.
– Crane Cloak-Elegant

The man is handsome and gentle. The man is eloquent and wise.
– Dream Shoes-Elegant

Made by precious misty jade, the crown should definitely go with the scarf made from the best flower cloth!
– Fog Crown-Elegant

Zhu Ruosheng read through the Cloud Empire history as a child. At 16, she passed the highest imperial exams.
– Floating Dream-Rare

She was never nervous even when facing a styling competition of life and death.
– Crane Cloak-Rare

The world is a hotel for all life and time is a visitor. Life is like a dream. How many pleasures do we have?
– Dream Shoes-Rare

Zhu Ruosheng is so intelligent that she beat the national go player, Bai Yiyue, at the age of twelve.
– Floating Dream

She was never nervous even when facing a styling competition of life and death.
– Crane Cloak

A true traveler can live anywhere and doesn't care about time passing. We should just enjoy this short life!
– Dream Shoes

The suit is primarily about Zhu Ruosheng, who is described as very intelligent and hardworking. At the age of only twelve, she beat a go player, Bai Yiyue, and at the age of sixteen she passed the highest level imperial exams after reading all of Cloud's history. She subsequently joined the army of Yue, led by the head of the family, Yue Qianshuang. Those in her family are not elitist and tend to be nomads, singers, and calligraphers.

The suit also describes a rare type of jade known to the Cloud Empire as Fog Jade, named as such due to the clear surface that looks as if it's surrounded by fog. The headpiece of the suit seems to be made using Fog Jade.

Retrieved from "https://lovenikki.fandom.com/wiki/Wisdom_of_Quill_Fan?oldid=115827"
Community content is available under CC-BY-SA unless otherwise noted.