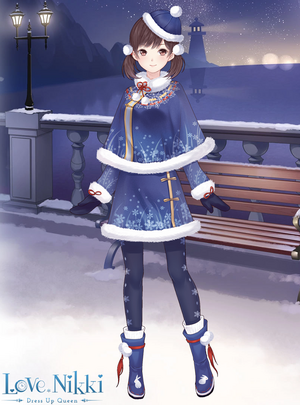 Winter is a character in Love Nikki. She is one of the four Flower Field fairies, and she protects the ancient pavilion along with Spring, Summer, and Autumn.

Winter is a young-looking girl with amber eyes and dark brown hair which wear it in two identical pigtails tied with puffballs. She wears a blue winter outfit with white fur trim.

Winter is shown to be childish and playful, though sometimes immature. She gets frustrated when the more studious Fu Su doesn't always want to play along with her.

Winter is the fourth and final Flower Field Fairy. She immediately began telling Nikki and her friends that she overheard their conversation with Autumn about convincing Fu Su to leave the Pavilion and experience the world. She didn't want him to leave because then she would have nobody to play with. When they tried to explain that it was Fu Su's decision whether or not to leave, she said she would secretly follow him if he left.[1]

Fu Su decided to leave, and Winter immediately told him she would pack up and go with him.[2] The two went together and later ran into Nikki and her friends at the Fantasy Styling Contest.[3]

Nikki saw Winter on her own when they were at the Lily Fashion Carnival together. Winter said that she had parted ways with Fu Su and was now working as a volunteer.[4]

Winter and Fu Su have a close relationship, and have hung out together since they met.

Retrieved from "https://lovenikki.fandom.com/wiki/Winter?oldid=126121"
Community content is available under CC-BY-SA unless otherwise noted.