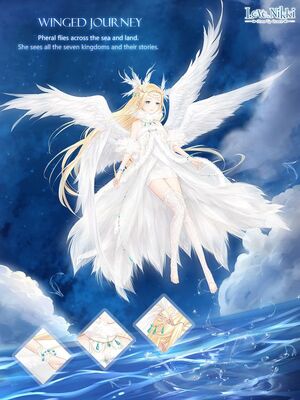 Pheral flies across the sea and land. She sees all the seven kingdoms and their stories.

Winged Journey is a Story Suit that appeared in the Caelum et Ocean Event.

Pheral the Seagull was born on a distant island in autumn. One of Miraland's most courageous adventurers, she flies, year after year, over seas and continents, over mountains and forests. She knows how the people from different countries live, and even knows what the roses in their flowerbeds dream about.

On the last day of summer, Pheral said farewell to her mermaid friend Ellisa, promising to return from the south next summer with new stories to tell her. Ellisa was dismayed and reluctant to see her friend go, but hopeful for her return, and sang her a song expressing her feelings as she flew away.

Many summers passed over Dew Ocean, but Pheral never did return.

Ellisa, still believing in her friend's promise, waits expectantly every summer, singing about her friend and her long wait. She sings of their encounter, an encounter between sky and sea, and seabirds of different shapes and sizes carry her song to every corner of the world.

Finally, one day, a seabird brings Ellisa a faded rose, the new story Pheral had promised her long ago. Pheral could not come back here, but she never forgot her promise, and asks that Ellisa wear this rose in her hair to remember her by. Tears roll down the mermaid princess' face and onto the dead rose... and with her tears, it comes back to life, brightly waving in the seabreeze.

The sky and the sea, the mermaid and the seagull, a promise in the north and a story from the south... Something other than the constant ocean waves can be heard echoing over the sea: a summer song.

Gladys, the Pearl of the Deep Sea, created a statue with her ancient, precious pearl and named it The Song of Summer Ocean.

A commemoration of the encounter between sky and sea.

Let's sing for the brave one
On wind and rain
Across land and sea
The story is told in bird's song
She lights up the night of mermaid sea
The lonely bird watches
The rose awaits
Ocean, my dear friend
When will our next meet

Pheral was born on the island during Autumn. With a pair of white wings, she is the bravest explorer
– Fleur

Pheral flies across the sea and land. She sees all the seven kingdoms and their stories.
– Feathers of Vast Sky


Pheral always regrets that she cannot take a look into the deep sea. There must be countless stories.
– Blue Sky's Wish


As summer ends, Pheral flies south. She said she would return next year with new stories.
– Sky Ocean Appointment


With the song of friends, Pheral flies south, with the hope to bring new stories next year.
– Sky Sea Promise


In a summer night, Pheral heard the song of a mermaid, singing about the eager for sky and land.
– Sky Feather Coronet


Mermaids sing the miracle encounter, and birds bring the story around the world.
– Starry Night Chant


On the Dew Ocean, apart from the sound of waves, the songs of mermaids also exist for ages.
– Wings of Vast Sky


Every night, Ellisa will send Pheral a crystal, inside which is a magic story in the sea.
– Kiss of Sea and Sky


Pheral adores Ellisa very much. If she had a fin, she would dive into the deepest sea.
– Feather Fantasy

Retrieved from "https://lovenikki.fandom.com/wiki/Winged_Journey?oldid=162798"
Community content is available under CC-BY-SA unless otherwise noted.