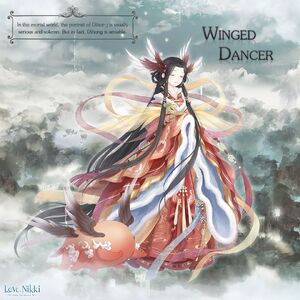 In the mortal world, the portrait of Dihong is usually serious and solemn. But in fact, Dihong is amiable.

Winged Dancer is a Cloud suit that could be obtained during the Ancient Atlas event.

Dihong has a naughty nature, loves music.
Pet's name is Dijiang with the shape of a bag,
red like fire, six feet and four wings.
Plump and faceless, but a master of music.
Gold in the mountains, jade in the waters.
Dijiang collects and dances.

Dihong has long black hair. It's said that it comes from the clouds in a moon eclipse night.
– Eclipse Cloud

Dihong likes living things and music. So instead of sacrifice, people offer her music and dance.
– Tune of Divine String


The divine above cloud tend to ignore the mortal world, but Dihong and Dijiang love mortal music.
– Song on Cloud


Dijiang has 4 wings and is naturally attracted to music. But it's Divine Emperor who taught it real dancing.
– Dijiang the Divine Beast


A bird offers a beautiful feather as a tribute. Dihong makes it a coronet and mountain fairies love it.
– Feather Coronet


Dijiang rolls over and when it spreads its wings, colorful stones fall. Dihong says, 'Where are these eggs from?'
– Winding Water


In the mortal world, the portrait of Dihong is usually serious and solemn. But in fact, Dihong is amiable.
– Free Spirit


The area where Dihong dwells yields fine gold and white jade. The collectors believe the red bird is a good omen.
– Fine Gold and White Jade 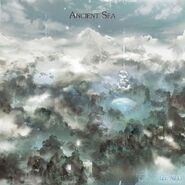 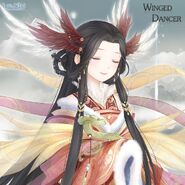 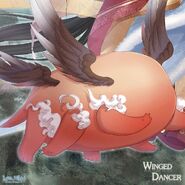