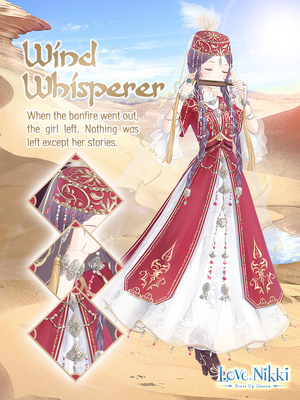 When the bonfire went out, the girl left. Nothing was left except her stories.

Wind Whisperer is a Cloud suit that can be obtained through Evolution of its parts available in the Association Store.

The girl whistling a harp made of leaves bids Nikki farewell, only leaving the wind whisper behind.
– Wind Whisperer-Epic

When the bonfire went out, the girl left. Nothing was left except her stories.
– Sway Dance-Epic

The wanderer won't stay for temporary pleasure. The girl left for the next zone unknown.
– The Wanderer-Epic

As night falls, all the animals went back their home, but the girl is always on the road.
– Cruise-Epic

Every night, the girl will kindle a bonfire beside which Nikki will sing happily with her.
– Sway Dance-Rare

It's not an easy thing to travel all year long, but she felt it worthy for all friends she met.
– The Wanderer-Rare

As the sun sets, the returning clops were heard on the wasteland. Human and animals went home alike.
– Cruise-Rare

During a travel, Nikki met this girl who looks like not from this world.
– Wind Whisperer

She didn't say where she came from, only talks about all the stories on the trip.
– Sway Dance

The girl travels all over the world. Not only she saw the vast world, but also met so many friends.
– The Wanderer

Under the sunset, she heard the clops of returning horses and the whip of a herdsman.
– Cruise

Wind Whisperer tells the story of Nikki meeting an otherworldly-looking girl who tells many stories, not telling Nikki where she comes from. The girl travels all year long, which isn't an easy thing, but she makes many friends. She kindles a bonfire every night, where her and Nikki sit together as Nikki sings songs and the girl plays a harp made of leaves. Eventually, the girl bids Nikki farewell, leaving only her stories and the whispers of wind behind.

Though the suit is listed under Cloud, it is possible that the Wind Whisperer refers a Wind Whisperer from the Republic of Wasteland. The item descriptions themselves mention "the wasteland", and several Wind Whisperers are mentioned who come from there:

The stages of the suit's evolution

Retrieved from "https://lovenikki.fandom.com/wiki/Wind_Whisperer?oldid=144786"
Community content is available under CC-BY-SA unless otherwise noted.