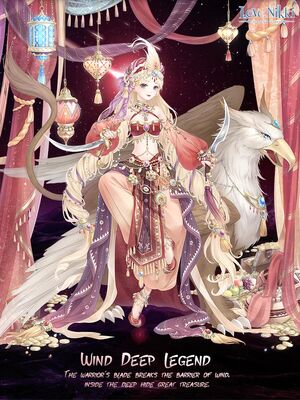 The warrior's blade breaks the barrier of wind. Inside the deep hide great treasure.

Welkin believes no fate or prophecy. Instead, they worship the strength of wind. Only Lika can control wind
– Lika

The wind takes the scent and voice away. The danger unknown lurks around like an unseen shadow
– Wind Rider-Top

The two walked along the stream in the cave and reached a fork with marks of the sun, the moon and stars.
– Wind Rider-Bottom

I come to break the fate. I fear no death and adventure itself is the most exciting.
– Star Revelation

The young Lika succeeded the courage of her father. She gains the favor of Welkin God: Griffon Uno.
– Uno the Griffin

Treasure was found at the end of a stream. Lika opened the box in which gold and jewelry were glistening.
– King's Banquet

The story is originated from a witch's prophecy. Incomparable treasure is buried in Wind Deep.
– Feather Sacrificed

Lika held the double blade high and a blue tornado answered her call, shooting the vulture down.
– Gauzy Sleeves

Lika is a plucky and powers warrior girl from the Welkin Tribe. She's a strongwilled fighter who, like her people, believes that fat is not pre-ordained, and she wants to prove this to the fortune teller Cassandra. Her faithful companion is Uno the Griffin, and the two fear no one.

Retrieved from "https://lovenikki.fandom.com/wiki/Wind_Deep_Legend?oldid=123662"
Community content is available under CC-BY-SA unless otherwise noted.