Wind Deep is a tribe in the Wind Chasm of the Republic of Wasteland.[1]

A witch and prophet named Cassandra (also written as Kassandra) traveled across all of Wasteland before following the messages of the wind to Wind Deep. She had a book called the Fate Book, also called the Book of Destiny, which contained secrets about the past and the future.[2] It was said that many people had tried to seek Cassandra's treasures in the Wind Chasm, only to meet their deaths.[3]

During this year, Cassandra was imprisoned by the Firmament Tribe's best warrior, Lika (also written as Rika) while Lika searched for Cassandra's treasures for the tribe.[3]

Nikki, Ace, Bobo, and Momo went to the Wind Chasm briefly, with Tuda accompanying them part of the way, in order to search for information about the Miracle Scroll, a treasure they were seeking. They had heard about Cassandra and her Book of Destiny, which contained the past and future of the Republic of Wasteland written down, and hoped that the book had more information that could help them.[3]

As they walked deeper towards the chasm, they were warned about the dangers of trying to seek out Cassandra's treasures. However, Nikki maintained that she just wanted to ask her about the Miracle Scroll rather than hunt for treasures. They ran into Annabel, who had been staying at the nearby Firmament tribe. She told them about Cassandra being imprisoned by Lika but that Lika had released her. The motives for her doing this were unclear to the group.[3]

Cassandra and Lika came to the Wind Chasm, where they met Nikki and her friends. Cassandra reprimanded Lika for trying to steal her treasures, and warned that she would pay for what she did. However, the Firmament Tribe viewed fate quite differently compared to Cassandra, and Lika was unconcerned.[3]

Nikki bravely asked Cassandra about the Miracle Scroll, but Cassandra said that the Book of Destiny had no information about it because fate and miracles were incompatible. Cassandra went on to say that she couldn't see Nikki's destiny at all. The last the group saw of Cassandra and Lika was the two of them flying away on Lika's griffin, Uno.[3]

Another tribe exists near Wind Deep called the Firmament Tribe, also referred to as the Welkin Tribe. They only believe in willpower and the wind rather than believing in destiny.[3] 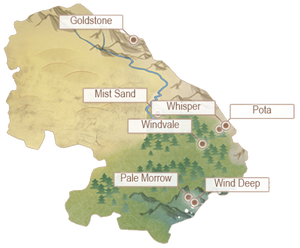 Firmament and welkin are both words referring to the physical space of the skies or heavens that cover the earth.