Love Nikki-Dress UP Queen! Wiki
Register
Don't have an account?
Sign In
Advertisement
in: Suit, Classic Suit, Crafting,
and 8 more

The lights of the city all went out that night, the white cherry trees swaying in the dim moonlight.

White Blossom is a Classic suit —previously an Apple suit— that can be obtained through crafting. It is a lifetime suit, a type of suit known to require a long time to complete due to the large amount of materials needed. It is also customizable.

Back to Classic suits

A phial sits in front of Crescent, a new medicine smuggled to her by out of the North Kingdom by the Mercury Group; a personal gift to Crescent from the Mercury Group's chairman. Whether she takes it or not is up to her; the new medicine has a fifty-fifty chance to either kill the virus in her body... or to kill her.

It is a gamble of life and death, and she can't keep waiting any longer. She wants to live, to watch Kimi grow up and and to grow old with her beloved Schiller. She doesn't want to see Schiller hoping against hope for her, day and night, or to see her best friend trapped in prison. She doesn't want to die at all; she's eager to live.

Because she loves these people, there is always hope in her heart.

She put the pill in her mouth and falls asleep, the result unknown.

Crescent fell ill one month ago. Everyone believed it was a common cold, but she never recovered from this 'common cold.' Welton's most capable doctors were helpless before her condition. Schiller didn't realize fate's cruel joke until researchers from the Rousse Group brought a report to the building of Apple Federation Apparel Group.

The Rousse Group had stolen Crescent's blood sample, and found that she had contracted a new, lethal virus. They developed a vaccine for the virus and used it as a bargaining chip to negotiate with Schiller. Quite openly, they stated their objective: to obtain Eris' Kiss and to gain access to his treasure vault. Schiller refused, for he knew he could never let them get their hands on the secret in the treasure vault.

However, Crescent was getting worse, and was spending more and more time in deep sleep. She grew sickly pale, and her long, beautiful hair slowly became yellow. She called out to her husband and daughter in a nightmare. Schiller held her hand and kissed her on the forehead, but could not save her from the abyss of her nightmare. He never felt so powerless; even if their names were engraved in the city square, even if thousands of lights were lit for their love, he still could not save his beloved wife.

Rin's arrival brought hope to them. She was Crescent's best friend and a physics researcher from the Rousse Institute. As students, Rin was always protecting her, and this was no exception. She told Schiller she would steal the medicine from her institute and rescue Crescent from her endless nightmare. Schiller prepared everything he could to support her, but in the end she was caught and her name smeared by the media. The journalists even tracked down the school of her child, a blonde teenager named Flynn. As proud as his mother, he responded the malicious journalists' questions with silence.

Schiller didn't want to implicate these innocent people. To save Crescent, there was only one way.

He removed Eris' Kiss and was ready to go to the Rousse Group alone when he received a call from the hospital. It was Crescent; she had woken up! She said on the phone that she wanted to wear White Blossom once more.

Did Crescent know something? Schiller didn't know what was on her mind, but there must be someone who doesn't want Eris' Kiss to fall into the hands of the Rousse Group. He brought White Blossom to Crescent and watched her wear the dress once more. She was so thin, even White Blossom no longer fit. She asked Schiller to put Eris' Kiss back, to complete their memory.

Schiller could never refuse her.

That night, they went to the city square named after their love, where the moonlight shone and the white sakura bloomed resplendently. It was the pride of the entire Apple Federation. Crescent leaned against Schiller, her finger gently brushing over the square plaque- 'Love; From a Moment to a Lifetime.'

When Crescent put back White Blossom in its original place, it didn't mean she had given up hope for life. She loved these people, and was reluctant to leave them in sadness. She would have to bet with on the future, to bet with her life.

Three days later, a funeral was held for Crescent. Every celebrity in the Apple Federation attended the funeral, with the president of Mercury Group standing solemnly at the front of the queue to lay a white rose on her coffin. Even the Rousse Group came to pay their respects. Kimi wore a black dress and was being guarded by Rin, who had just been freed on bail. She couldn't completely understand what death was. She was uneasy, and the heaviness of despair bewildered and overwhelmed her. She looked around for her father, and found Orlando and Reid standing on the cemetery gate. Orlando told her that President Schiller had already left.

He was making a final farewell to White Blossom, a symbolic affair between only Crescent and himself. The resplendent white sakura faded in the wind; the love from a moment to a lifetime died at that moment, and everything became meaningless. At this point, he was led be a warm and soft little hand.

'Don't worry, Daddy. I'll always be with you. I promised Mommy that I would do my best to grow up and protect you.'

Schiller picked Kimi up. She is a life derived from Crescent, and she is the future.

If I did not meet Schiller, my orbit might be different. It's he who brought me to a bigger world.
– First Quarter Moon

The light of the whole city went out that night. All those cherry blossoms under moonlight... I can never forget
– Song of White Sakura

Our names and oath were engraved on the square. It's not just a memento of our love, but also our duty and mission.
– Engraved Eternity


I used to travel a lot with Schiller around the country. Apple turned not to be that beautiful as I imagined.
– Feather Shimmer


The brilliance of white cherry blossoms is like Milky Way lost in the mortal world, giving us strength.
– Night Snow Sakura


In the corner of the city, I saw children's bright eyes on their smudgy faces. I'll try my best to help them.
– Wind of Retrospect


It's Schiller made me who I am. Our bond started with love, but now it covers much more.
– Love Always


I want to protect every child in Apple Federation and give them a beautiful and equal environment.
– Praying Poem


What I can do is so limited. I can give them short warmth, but not strong enough to save this world from misery.
– Saying of Sakura


If possible, I'd like to preserve the brilliant night and share it when we grow old.
– Sakura Moon Night


Life is long and a moment is short, but that night, that moment is long enough to be remembered lifelong.
– White Blossom

When Kimi was born, she was like a quiet white dumpling. Afraid of waking her up, I just touched her curly hair.
– Last Quarter Moon


Kimi gradually grows up, I hope she can quickly learn to walk, but also hope she can stay in my embrace longer.
– Song of Night Sakura


Just like Schiller, Kimi is not used to expressing her feelings, but she will always be there when you need her.
– Eternal Life


I can not always protect her, so when she falls down, I chose to watch her struggling to stand herself.
– Feather Twilight


If one day, I will leave you, my child, you have to remember that I will always love you.
– Love Snow Sakura


She always winked her curious eyes and used her soft little hands to touch my cheeks, like to know me by touch.
– Sakura in Snowy Night


Kimi's favorite story is one about the little mermaid and the bird. That's my favorite too.
– Dream of Retrospect


And she will leave me, from my body, from my embrace, from where I can see, for her future.
– Love of Separate


Kimi wants to be a designer as good as her father, but I hope she could find her own color.
– Wishing Poem


I think I am the lucky one that it's not I delivered Kimi, but Kimi chose me.
– Saying of Night Sakura


I can not love her too much because one day I will leave her and she has to be strong.
– Sleeping Moon Star


If possible, I'd like to preserve the brilliant night and share it when we grow old.
– Sakura Moon Night

The White Blossom was originally designed by Schiller, Kimi's father and the chairman of the Apple Federation Apparel Group, for his wife Lady Crescent, and presented to her in Welton's City Square. It was considered his most prized work for years to come. After Kimi's mother passed away, the dress was kept in the group's treasury room.[1]

In the year 680, a banquet was held in order to showcase it by Reid and Charles, who had gained control over the group after Apple joined the war.[1][2] During the banquet, the dress was stolen by Hiber by request of Reid. Nikki and her friends attempted to intercept the dress immediately after it was stolen, but were unable to.[3] However, her cousin Sofia, who was also a phantom thief, safely returned the dress to Kimi.[4]

Kimi then attempted to use the White Blossom to lure Reid and Charles to the Apple Apparel Group headquarters to learn more information. She was successful, as both of them appeared and Reid tried unsuccessfully to get her to hand over the dress. She also learned that Charles was on her father's side the whole time.[5] However, a showdown occurred and Charles was killed while trying to escape with the dress. An assassin named Shade who was working for Reid took the dress instead and vanished.[6]

After being kidnapped from a church in Losol, Nikki and Kimi were put on a plane with the suitcase containing the White Blossom. Though they were left alone with the dress,[7] they had no control over the plane, and were forced to land in North Kingdom with it.[8]

Once they landed, they met Nidhogg, who told Kimi as long as she handed over the White Blossom they were free to go, and even told her that he would arrange for her travel back. Kimi, understanding that the situation was dangerous and that they could have more than just their lives at stake, agreed to give over the dress. Nikki did not accept this, and demanded to compete with Nidhogg in a styling battle for the dress. However, Nidhogg drew his sword, and Nikki was only saved by Louie jumping in her path and fighting back.[9] 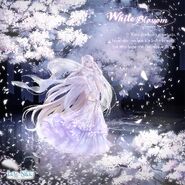 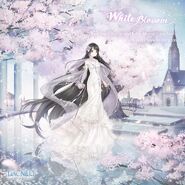 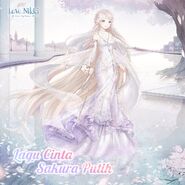