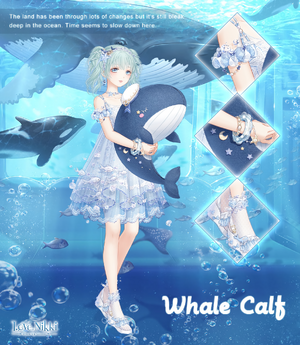 The land has been through lots of changes but it's still bleak deep in the ocean. Time seems to slow down here.

Whale Calf is a Lilith suit that appeared in the Boutique from October 5th to October 14th, 2019. The pack costed $2.99 USD and included the suit, 150

The blue sea is the most mysterious part on earth. The sound of tides is the deepest chorus.
– Listen to the Blue Sea

The land has been through lots of changes but it's still bleak deep in the ocean. Time seems to slow down here.
– Glazed Seashells

Under the moon, a whale rises above the surface like an island. How many moon rises has this species witnessed.
– Clear Waves And Ripples

Alain comes from a seaside town where people believe in the god of sea and the story of whales is well-known.
– Daughter of Sea

It's said that each whale is a born bard who travels around the vast water, just trying to chant in the moonlight.
– Ancient Whale Song

Gradually the whale becomes a totem of Alain's faith. The gigantic and mild whale is like a dream out of reach.
– Ocean Dream

On a full-moon night, the gigantic whale follows the ocean current and keeps moving to explore the ocean deep.
– Into Ocean Deep

A friend asked Alain if she wants to see a whale. She said, 'It's better not to disturb them.'
– No Trespassing

Sometimes, Alain watches the sea waves crashing against the rocks, wondering whether they are raised by a whale.
– Gentle Sea Waves

The whale is just like the flickering star. You don't need to see it but you know it's there accompanying you.
– Song of Whale

Maybe one day she could see her beloved whale. The moment they meet, the whole world would be peaceful and quiet.
– Dream Encounter

The suit is about a girl named Alain, who lives in a seaside town (possibly in Lilith Kingdom). It is a place where people believe in the god of the sea and believe that whales are "born bards" who sing in the moonlight. Though the land has changed a lot through the years, the sea remains the same, mysterious and slow.

Though Alain views the whale as a part of her faith, she believes it's best not to disturb them, so she doesn't seek them out. She knows it's with her even if she doesn't physically meet one. However, she hopes one day that she'll be able to, and on that day, everything would be peaceful.

Retrieved from "https://lovenikki.fandom.com/wiki/Whale_Calf?oldid=141250"
Community content is available under CC-BY-SA unless otherwise noted.