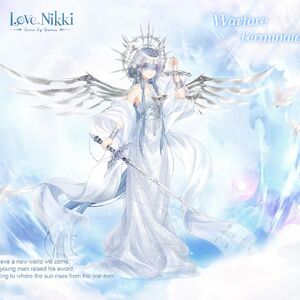 I believe a new world will come. 'The young man raised his sword, pointing to where the sun rises from the war-torn land.

Warfare Terminator is a Pigeon suit that can be obtained from the Association Shadow Workshop.

There is a collapsed temple near the Apple Federation. People there once worshiped the past goddess of war.
– Signs from Heaven

The inscription has disappeared. The temple lost its believers. A peaceful land doesn't need a goddess of war with sword.
– Goddess of War

It is said that she is a fallen angel, with a pair of wings like sharp blades. Once her eyes open, she will bring wars.
– Lost Legend

The ancient books recorded the past glory of the goddess about her sword helping people in the war and bringing them hope.
– The Past Glory

People forget the origin of war is the interests, looting, conquest and rebellion of themselves, but they just blame others.
– Falling of Divine Light

She heard children's crying, warriors' wailing, the sound of bleeding and the desperate praying.
– Hearing the Gospel

Only old people remember goddess of war doesn't belong to any country. Only she could bring hope for the weak once war begins.
– Feather in the Dead End

The temple was once full of the weak's tears of joy. They hugged together, becoming her devout believers.
– Inscription on the Monument

The gray veil covers her eyes, so she won't be deceived by the surface of the world and sees the truth and facts.
– Eye of Ruling

Because of her, they dare not to make war...'the old man told the boy. 'Is she still alive?'...she is tired, so she's asleep.'
– Star of Darkness

The god who isn't needed by others falls into a deep sleep. She has become history and a legend.
– Sleeping Seal

Long sword is not for killing but for justice. She will lead the just side to win the war, and let the warmonger pay the price.
– Blade of God of War

‘Do you believe gods exist? 'asked the boy with silver hair. 'God? This world doesn't have gods. We don't need gods. '
– Damned Chain

Time witnesses the alternation of war and peace, and also the destruction and rebirth of the world.
– Libra of Justice

The wings made of sharp blades hang a cross swaying in the wind. Thick dust on the stone tablet is gradually blown away.
– Wing of Perdition

I heard the long-lost call. In the dark and disordered sleep, I woke up and saw a person holding a sword with blood on it.
– Mercy to the World

I believe a new world will come. 'The young man raised his sword, pointing to where the sun rises from the war-torn land.
– Ending Prelude

Retrieved from "https://lovenikki.fandom.com/wiki/Warfare_Terminator?oldid=141256"
Community content is available under CC-BY-SA unless otherwise noted.