Love Nikki-Dress UP Queen! Wiki
Register
Don't have an account?
Sign In
in: Suit, Ruin Island Suits, Recharge,
and 3 more 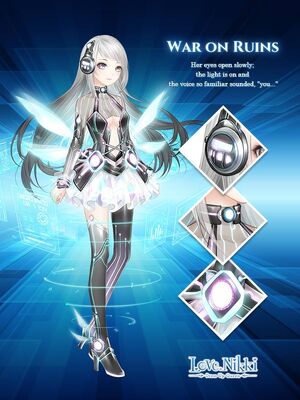 Her eyes open slowly; the light is on and the voice so familiar sounded, "you..."

War on Ruins is a Ruin suit that first appeared as a Cumulative Recharge suit from June 28th to July 4th, 2017 for $4.99 and $9.99 USD. Since both milestones awarded suits, one copy could be customized to the Virus recolor. It can now be bought from the Clothes Store and customized.

He is the top engineer in the Ruin Island. He can turn anything useless become a powerful device.
– Make Beautiful

He witnessed recession of this once prosperous island and determined to save it himself.
– War on Ruins


He firmly believes that technology can change everything. His sister is his best supporter.
– Electronic Ghost


He has finally loaded her soul into the machine as data. Now she became the core of AI.
– Hologram


He only concerns his little sister, who has been sick since childhood and may pass away anytime.
– Headphones


He worries things may be beyond control if this went public. So he said it's just common AI butler.
– Suspension's Wings


If he could change the Ruin Island with high technology, is it possible to save his beloved sister?
– Intelligent Data


Her eyes open slowly; the light is on and the voice so familiar sounded, 'you...'
– Wound of Nirvana

My brother is the only hero for me since childhood. He can bring power into anything.
– Make Beautiful-Virus


Do you trust me? I will protect you at any cost!' 'I trust you, brother! I am proud of you!'
– War on Ruins-Virus


My brother buried himself in the research. I know my body won't last long.
– Electronic Ghost-Virus


Brother, destroy me! Or I will exterminate the whole AI system of Ruin! Do it!
– Hologram-Virus


I feel different and I don't know if I'm still me. But it matters no more as I can see his smile.
– Headphones-Virus


Those bad guys implanted a virus in my program. I cannot stop myself from attacking everyone's AI.
– Suspension's Wings-Virus


Brother, they broke the defense system, then I passed out. Brother, I am so scared!
– Intelligent Data-Virus

The descriptions of each item in the set tell the story of the most famous inventor in Ruin Island and his younger sister.

The original version explains that the brother is the most talented engineer in the Island, able to build things from scratch and give life to his creations. He is determined to both save his homeland from its decadence and make sure that his little sister and biggest supporter, who is gravely ill, will not pass away. His solution is to upload his sister's mind and conscience into a cybernetic body, making her the core of his best creation.

The Virus version concludes the story from the sister/robot girl's point of view. She talks about her admiration for her talented brother, her decision to protect him and how she deals with her cyber body. His enemies inject her with a virus that forces her to attack anyone in her surroundings, so they can use her to destroy the whole AI system of Ruin Island; she remains self-aware enough to beg her brother to destroy her and ultimately activate her self-destruction system, sacrificing herself to save both him and her homeland.