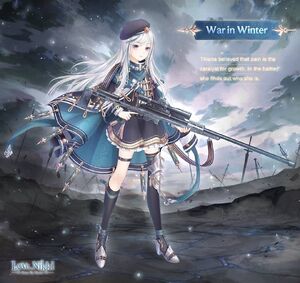 Thiana believed that pain is the catalyst for growth. In the battle she finds out who she is.

Will of Battle
Spread Wings
30

War in Winter is a North suit that could be obtained through a Cumulative Recharge from November 5th to November 11th, 2018.

Completion prize: A Styling Gift Box containing Will of Battle, Spread Wings and 30

In the morning before Sun shed light on the earth, Thiana's shift started. It's her first quest.
– War in Winter

The whole world is frozen and fierce snow sealed the vision. Thiana holds the rifle like a statue in the snow.
– Cape of Glory

Recalling the drive to be enrolled in the military school, it's all about a name, Nidhogg.
– Undead Faith

In her dreams, she followed the lord with the will to sacrifice at any moment, all for the peace of North.
– Battle Cry

The tutor said the strong have to be strong herself. Only by destroying the rotten leaves can you see the rebirth.
– Invincible Way

Dark cloud shaded sun and it's getting even more freezing. In the remote, some figures appeared like a shadow.
– Dark Cloud

Thiana remembered the training in the school. She walked through the snowfield, leaving all the confusion behind.
– Edge of Snow

When the enemy was defeated, Thiana dressed her wound carefully, tasting the silent but surging pride.
– Imprint of Garrison

Charge and fight sometimes, rest and training the rest. Warriors on the border are the pride of the north people.
– Pride of North

The weapon answers the call with courage and power. Concentrate and focus, unleash the battle cry of fever.
– Fire of Battlefield

The fire spread on her chest. Thiana clenched her teeth to fight the pain till the dark brought transient peace.
– Will of Battle

Thiana believed that pain is the catalyst for growth. In the battle, she finds out who she is.
– Spread Wings

The suit is about a military student named Thiana who goes out to war for the first time. Her drive to enroll in military school was for Nidhogg, the North orphan turned Lilith Prime Minister, and she dreamed of following him to battle. She swore to protect the peace of North and takes pride in the battlefield. It is implied that she took a heavy wound to the chest, enduring the pain and waiting for peaceful death.

Retrieved from "https://lovenikki.fandom.com/wiki/War_in_Winter?oldid=145804"
Community content is available under CC-BY-SA unless otherwise noted.