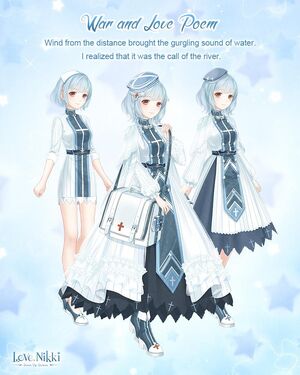 Wind from the distance brought the gurgling sound of water. I realized that it was the call of the river.

Flames of War and Love Poems
30

With snow falling on my body, I woke up and watched the pigeons flying by.
– Veronica

My comrades have already bowed to the silent dark death. Is this the last winter in my life? I do not know.
– Song of the Vahland River

I was trapped in the long night in birch forest. In a total whiteness, I lost my consciousness.
– Stairway to Heaven

On the snowfield, harmonica is accompanied by the creaking of carriages.
– Church Hospital

In this endless twilight, even the wild goose will cry in the birch forest.
– Veronica-Gorgeous

Only the sound of the harmonica accompanied me through life and death.
– Song of Vahland River-Gorgeous

Before the snowstorm, the sound of harmonica was rapid. That was a warning, and I even found his ropes and venison.
– Stairway to Heaven-Gorgeous

I could not see him no matter how hard I tried. I followed him even though not knowing where he would lead me.
– Church Hospital-Gorgeous

I suddenly awakened in the pale daylight. That ethereal harmonica seemed to lead the way in front of me.
– Secret of Birch Forest

Wind from the distance brought the gurgling sound of water. I realized that it was the call of the Varan River.
– Veronica-Treasured

Pretending that he was by my side, I walked alone until daybreak.
– Veronica-Night

The harmonica sound saved Varan River. Its sound waked the birch forest from its dream.
– Song of Vahland River-Treasured

I fell to my knees on the bank of Varan River with tears in my eyes. By the river is a small boat heading to my hometown.
– Stairway to Heaven-Treasured

I looked across the river, where was my long lost homeland. That was where I made my vow and where my soul rested.
– Church Hospital-Treasured

Hearing harmonica sound, I turned around and saw him for the first time. Waving at me, he fell down in the snow.
– Secret of Birch Forest-Treasured

Seriously wounded, blood stained his emblem. It was the enemy's falcon. I wrapped his wounds for him without saying a word.
– Flames of War and Love Poems

No one can wake up the sleeping birch forest, except her. Veronica was the only paramedic returning to the camp.
– Veronica-Love

The cheers of comrades were like spring on the bank of the Varan River. Veronica stared at the vast snow.
– Song of Vahland River-Love

Under fire and guns, the river was shining like silver. The girl cried in the middle of the night, but no one knew why.
– Stairway to Heaven-Love

Paramedics should bring warmth and hope to people. 'The chief medical officer handed over an emerald harmonica to her.
– Church Hospital-Love

Veronica no longer sighed any more. She played a harmonica minor, hiding her secrets in the woods.
– Secret of Birch Forest-Love

In the church hospital, the girl waited in front of the window every early morning.
– Veronica-Thought

The war ceased on Christmas Eve. Veronica prayed that peace could arrive at Varan River as expected.
– Song of Vahland River-Thought

The fire of war ceased on Christmas Eve. Though the war ceased at the moment, no one dared to celebrate the holiday.
– Stairway to Heaven-Thought

Inverted reflection of the stars is like light in the river. Painful thoughts and secrets were finally dissolved in tears.
– Secret of Birch Forest-Thought

The suit describes Veronica, a paramedic that assists soldiers in an ongoing war in the North Kingdom.[1] Far away from her homeland, she only wishes for peace, and feels scarred after so many of her comrades in the war died.

Before a snowstorm, Veronica heard the sound of a harmonica, sounding out a warning. She tried to follow the person who had sounded the harmonica through the forest, and even found his equipment (ropes and venison). Finally, she found him, and he waved at her before collapsing into the snow. Veronica approached the wounded man and realized he was wearing the enemy's falcon emblem. Still, she wrapped his wounds for him without a word.

That night, the snowstorm arrived, and Veronica found herself trapped in the birch forest. She lost consciousness then, only waking once it was daytime again. The sound of a harmonica somehow led her way until she was able to hear the sound of the Varan River again. She walked alone until she reached the river, pretending the enemy soldier she had helped was still by her side. Once she arrived, she saw a boat leading to her hometown, and she sunk down to her knees in relief.

She arrived back to her camp, situated further down the river, but she was the only paramedic that did. Her comrades cheered for her, and the chief medical officer gave Veronica an emerald harmonica so that she could bring warmth and hope to people. Veronica went on to play it, hiding her secrets through the music.

The war ended on Christmas Eve, and although Christmas was the next day nobody had it in them to celebrate the holiday. It's possibly implied that the boy Veronica helped live, symbolized by the two simultaneous harmonica notes that sounded over the river at the same time.

[1] Though the suit is categorized as a Pigeon suit, the river it refers to, the Varan/Vahland river or 瓦兰河, is a river in the North Kingdom which does not flow into Pigeon at all. The additional information in the suit mentions an ongoing war and a snowy setting, which indicates that the events of the suit take place in the North Kingdom.

Retrieved from "https://lovenikki.fandom.com/wiki/War_and_Love?oldid=146537"
Community content is available under CC-BY-SA unless otherwise noted.