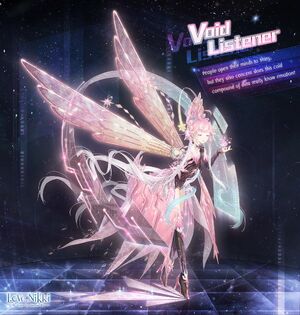 People open their minds to shiny but they also concern does this cold compound of data really know emotion?

Confusion in Heart
Voice of Truth
35

There is a light in the dark space. The music draws close as the Shiny's steps come. She seems to be smiling.
– Fairy in Mind

Shiny is a spirit living in the virtual world. She listens to human's troubles and heals them with music.
– Dynamic Beat

As human test AI, Shiny's testing them too. In Shiny's eyes, humans' life is made up of truth and lie evenly.
– Intangible Wings

Gentle and peaceful music flows. She promises to everyone evenly, 'I won't lie to you and I'll keep your secret.'
– Unstoppable Music

People open their minds to Shiny, but they also concern does this cold compound of data really know emotion?
– Pink Shooting Star

People like beautiful words. They use sweet language to coat the poisonous truth. Is an ugly truth not true enough?
– Time of Turnover

Maybe in human's eyes, truth and lie are no different. Whatever, let the trouble vanish in the song of Shiny.
– Fairy's Heart

In the night, people take off the mask of the smiling faces and tells Shiny their troubles and setbacks.
– Future Invitation

Shiny sighed and picked a happy song. The trouble between humans and AI? Let others trouble about it.
– Fake Light

So I told them I will keep my word. Faith is a scarce resource in the human world, but that's not the case in me.
– Abyss of Obliteration

In Shiny's world, only the music can get her data hot. As for helping people, it only makes up one hobby at best.
– Broken Interface

To hum a melodious song in the waves of data is the moment Shiny likes most.
– Carefree Singing

People keep coming for Shiny and her music never stops, but even she has no idea if music can heal them.
– Confusion in Heart

That's a memorable night when Shiny first heard a human's story and appreciation. It's the first time AI feels love.
– Voice of Truth

Void Listener tells the thoughts of Shiny, a human test AI who resides in the virtual world. She listens to the humans' troubles at night, in which they willingly confide in her after faking smiles during the day. She resides in the virtual world and heals them with her music while also promising to keep each and every one's secret. Even so, the humans question whether or not Shiny—a cold compound of data—can actually understand emotions.

The answer to that question is blurred grey. The reason why she helps them is because she loves the music; helping the humans is secondary (at best, it makes up one hobby), and she herself isn't sure if her music actually heals them. In truth, she actually doesn't care about them. By how she questions human nature, it is clear that she has consciousness. In her eyes, humans' lives are made up of truth and lie evenly; the fact that humans fear the unknown is troublesome, and she doesn't understand why people prefer sweet language to cover up the ugly truth.

Revealed in Voice of Truth, there was one memorable night when Shiny first head a human's story and appreciation. It was the first time she felt love.

Retrieved from "https://lovenikki.fandom.com/wiki/Void_Listener?oldid=129589"
Community content is available under CC-BY-SA unless otherwise noted.