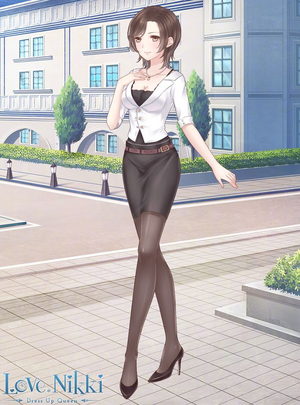 Vivi is a character in Love Nikki. She is a working woman who often appears around Miraland doing various jobs. She has worked as a model both at the Designer's Tea Party and at the Fantasy Styling Contest, among other jobs.

Though her home nation is unknown, her clothing resembles that of the Apple Federation, where Nikki and her friends first met her.

Vivi is mature and kind. She came to the Fantasy Styling Contest to cheer Nikki on and is always eager to find work that suits her.

Vivi was first introduced when Momo attempted to find the person who had stolen Lunar's designs in Wheat Field. However, she was merely on the way to a job interview, since she had recently graduated school.[6]

Nikki and her friends met Vivi again at the Designer's Tea Party in Wintermount, where she said that her last job didn't suit her and that she was going to apply to be a model at the Tea Party.[7] She was hired for the Pigeon Kingdom booth to model their "sacred and magical" styles, and hoped to become a full-time employee.[8]

Vivi later went to work at a cruise on the Celestial Lake in Cloud Empire, where she would compete in a styling battle with anyone who wanted to get on the cruise, including Nikki.[9]

At the Fantasy Styling Contest, Nikki ran into Vivi, who is working as a model again due to the shortage of models at fashion boutiques.[10]

Vivi later got a job at the Apple Apparel Group as a secretary, despite her dream of being a model. Her experience working in Welton gave her lots of knowledge about clothing and styling.[11]

Her next job was at the Rolterdan museum as a museum guide, where she ran into Nikki on her first day of work, and asked for her help.[2]

Retrieved from "https://lovenikki.fandom.com/wiki/Vivi?oldid=143574"
Community content is available under CC-BY-SA unless otherwise noted.