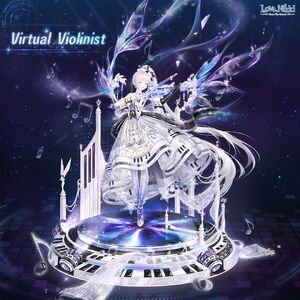 As the night falls, the grand theatre is all empty. The touching music behind the curtain feels strangely beautiful.
– Dreamland Snow

The young Duke had a quarrel with his teacher again. The endless training makes him tired.
– Flowing Music

Duke stays in the hall at a loss, but the sudden music breaks the silence. He lifts the curtain by a corner.
– Brilliant Sky

What's behind the curtain takes his breath away. Under the moonlight, a strange girl with wings is playing violin.
– Silver Frost

Duke is intoxicated with her music. She looks so beautiful like she is born to shine and be praised like a star.
– Eternal Note

Every night, she would take her beloved violin and performs under the moonlight in the empty theatre.
– Grave Prelude

Many things are forgotten except the unfinished wish. The ghost lingers in the theatre, waiting for the night.
– Remote Voice

Maybe fate favors her, she met Duke and told him her wishes, but the young man left after knowing her identity.
– Fantasy Zither

Anita has been trapped in the theatre for years, but nobody ever knows. After all, she's a ghost.
– Dark Current Star

Few things can touch a ghost. However, when she sees the man before the piano the next day, her heart throbs.
– Wind Aria

Anita undoubtedly is an excellent violinist. Under her guide, plain training becomes meaningful.
– Wings of Grace

The dancing notes seem to form a starry river. Duke hears her laughter and the word 'Thanks'.
– Dreamland Star

The promised day has come. Duke slowly plays his favorite piece before the empty audience accompanied by Anita.
– Flying Music

The music snaps out and when Duke runs over, there is nobody but an empty violin box under the moonlight.
– Virtual Violinist

The clear and touching music flows off from the player's fingers. Duke finds that his passion has never left.
– Virtual Flowing Light

The nights of duet quickly passed. Soon, the ghost will finish her wish and Duke feels he's changed too.
– Butterfly Keys

The story begins with a young Duke. He had quarreled with his teacher again because the endless training he had to do had made him tired. Night was approaching and he was at a loss on what to do, so he stayed in the hall of an empty grand theater. Out of nowhere, music that felt strangely beautiful broke the silence. He lifted the curtain by a corner to see where it was coming from, and what he saw took his breath away. Under the moonlight, a strange girl with wings was playing the violin. He was intoxicated by her music; she looked so beautiful, like she was born to shine and be praised like a star.

The girl in question was Anita, a ghost who would perform with her beloved violin under the moonlight in the empty theater. However, nobody ever knew that she had been trapped there for years (not surprising, considering she was a ghost, after all). Many things had been forgotten except for an unfinished wish. Thus, she would wait every night so she could perform.

The encounter between Anita and the Duke may have been fate. Perhaps it even favored her, because when she met him, she told him her wishes. However, he left after learning about her identity. There were few things that could touch a ghost, but when she saw the Duke before the piano the next day, her heart throbbed. And so, the two played together. She was, undoubtedly, an excellent violinist, and under her guide, plain training actually felt meaningful. The clear and touching music flowed off from their fingers and the Duke realized that his passion had never left him. The nights of duets quickly passed by and soon, Anita would fulfill her wish. At the same time, Duke felt he had changed too.

The two had played together for some time until finally, the promised day had come. The Duke slowly played his favorite piece before the empty audience, and Anita accompanied him with her violin. The dancing notes seemed to form a starry river. He heard her laughter and say the word 'thanks'. Then, the music snapped out and when he ran over, there was nobody there. Only an empty violin box under the moonlight remained. 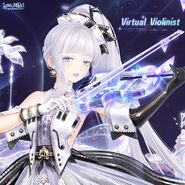 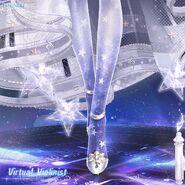 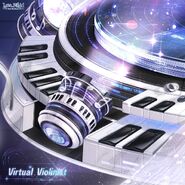 Retrieved from "https://lovenikki.fandom.com/wiki/Virtual_Violinist?oldid=146251"
Community content is available under CC-BY-SA unless otherwise noted.