Moonlit Escapade is the second chapter of the second volume from the story mode of Love Nikki.

The bright stars are hidden as Nikki and company travel under the forest's canopy, dressed in low-key Pigeon Forest elf fashion! 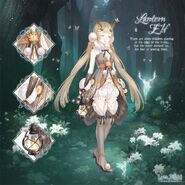 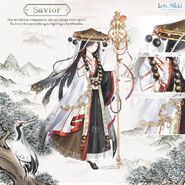 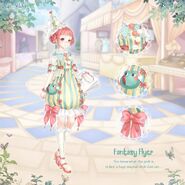 After being captured by Queen Elle, Nikki and Momo find themselves trapped and without a way to get out of the royal city Oren and reunite with Ransa. They try to escape several times, once with the help of Debbie, but no matter where they go in the royal palace - even attempting to escape through a magic mirror - Sherry, the former member of the Iron Rose still loyal to the Queen, catches them each time. It's only with the help of a mysterious hooded ally does Nikki finally manage to leave. However, what she learns from this ally and in the castle has implications beyond what she had imagined.

Nikki and Momo, stuck in a guarded room of Queen Elle's palace, reflect on their fate: they are unable to leave Oren until Nikki provides a specific answer to the Queen. What's more, they're meant to meet up with Ransa to leave that very night. However, when a guard is distracted by a cry outside the window, a mysterious stranger comes by and unlocks the door to their room. With no better option, Nikki decides to risk her fate and try to escape.

Lost, Nikki and Momo hurry up a tower's staircase, lined with writing on the walls about the mythos of Pigeon Kingdom. They find the legendary Rose Chest which Elle had won in the Nine-Day War, but are unable to open it until Nikki dresses up in a monk's outfit. After it opens, they see it's empty. Sherry and the palace guards corner them then, and they realize Sherry had set up a trap for them and summoned the guards in the first place to catch Nikki.

Nikki and Momo find themselves imprisoned again, this time in an actual cell rather than in a locked room. This is, of course, very disheartening, so they reflect on some of their memories in their time spent with each other to cheer up. In lower voices, they try and come up with a plan to steal the key and escape. However, their true savior comes in the form of Debbie disguised as a new guard.

Debbie, Nikki, and Momo make their way through the castle, which is full of traps, secret passageways, and the like that Debbie knows because of a history book. Nikki tries to bring up Sherry to her, likely intending to mention the fact that Sherry was the one who captured her, but Debbie seems so worried about Sherry's wellbeing that Nikki doesn't mention it.

They hear a patrol coming too late, and are faced with no escape route. That is, until a voice in a mirror begins to speak, offering them a "taste of the dream", and they jump inside the mirror without a second thought.

After going through the mirror, Nikki, Debbie, and Momo end up in Pigeon Forest. They voice their confusion, and the voice speaks again, offering up another dream land before changing it to an amusement park. Nikki politely asks about the identity of the voice, who reveals themself as Eli, the mirror fairy, and explains that he's been waiting for them a long time. He mentions an agreement with Chloris, expecting them to understand, but of the three, only Debbie knows what he's talking about.

Debbie reveals herself as a member of the Iron Rose, and promises to pass on Eli's message. Eli is impressed by her status as a member of the group, while Momo is confused since the Iron Rose is over. What's more, the information is classified, and Momo doesn't understand why Debbie would still protect information for her. Debbie explains that in her heart, the Iron Rose will always exist and that she knows the Queen must have her own reasons for what happened.

They step out of the mirror, but to their horror, they discover that every word of what happened in the mirror could be heard outside, and Sherry is there waiting. Sherry locks up Nikki and Momo and sends Debbie out of the city. Their fate changes again, though, when they receive a mysterious note on an arrow from outside their cell, promising that at midnight they will go on an adventure.

A figure slips into Nikki and Momo's cell that night. She's dressed in a cape, which hides her true identity: their friend Ace. She easily leads them through the castle, and Nikki begins to suspect who she is, but the figure asks that she not say her name. Instead of leaving the normal way, they climb the tower, and they're nearly out before an arrow lands in front of Ace. They realize they're surrounded by guards yet again.

The guards part, and Elle comes through, holding her scepter. Elle and Ace both acknowledge that they are on opposite sides, even though Ace doesn't want to be. Ace's last words before she jumps off the tower with Nikki and Momo are to remind Elle of how they used to sneak out of the palace in the same way.