Ode of Oren is the first chapter of the second volume of Love Nikki's story mode.

The uniform shows the identity of Court Doctor, while the strange mask hides the truth. To sneak into the Capital, you have to learn to hide.

NOTE: In Stage 1-5, the player also needs to have an umbrella equipped.

NOTE: In Stage 1-S1, the player also needs to have a gun equipped. Guns that can be used include, but are not limited to: Fantasy Shotgun, Assault Rifle, Snowfield Spirit, Officer's Pistol 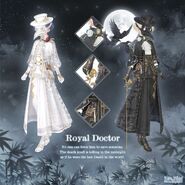 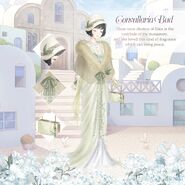 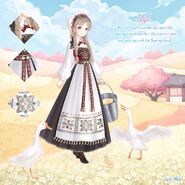 In the wake of the Iron Rose's disbandment, Nikki, Momo, and Ransa join forces to search for King Sayet's designs, hoping to bring peace to Miraland. But after an encounter with a mysterious magician named Noah, they decide to ask Queen Elle themselves about the relics and the truth behind the Iron Rose's disbandment. Unfortunately, security is tight around the Pigeon Queen's garden...

Nikki and Ransa request entry at a monastery in Oren, Pigeon, claiming that their train got delayed and they can't get a room at an inn. A nun answers, allowing them to come in from the rain. She asks their names, since Queen Elle mandates that travelers have to have their names registered, and compliments Ransa's sword before insisting that they change out of their wet clothes.

While looking for the guest room, Nikki, Ransa, and Momo meet Nora Von Rhein, the daughter of the president of the Amphithea Group. She is studying in the monastery, which is well-known for its collection of manuscripts and books, as well as possibly being home to masterpieces of the late King Sayet. She's overjoyed to hear that Nikki and her friends are from Apple too, and eagerly tells them about the monastery while she shows them to the guest room. After she leaves, they decide to check out the Classics Collection Room to search for the treasures left by King Sayet.

In the Classics Collection Room of the monastery, Nikki, Ransa, and Momo split up and find Sayet's designs. Ransa decides all they need is a diary, and Momo looks through it, impressed by the beautiful designs. He also notices that they all require the same material to craft, and asks her why that is. Ransa reveals that the reason that the Iron Rose disbanded is because she and the other members were unable to find that material, which was key to crafting one of the relics left behind by King Sayet and inherited by Queen Elle. Nikki and Momo are surprised to hear that this was the reason, but Ransa insists she doesn't want their sympathy. Just then, they hear the door click shut, and they discover that they're locked inside the room.

While they were worried about the door locking, a dove appears suddenly and tears a page from the diary they were holding. They chase it down a set of spiral stairs, where Noah enters the building and greets them. Ransa recognizes him, drawing her sword in reaction, and he recognizes her as an Iron Rose stylist in turn.

Noah hands back the page from the diary, but Ransa is suspicious of what the magician may have done to it. However, they see nothing amiss, and he admits he doesn't have any interest in Sayet's diary. He recognizes that Ransa does not want to speak to him, so instead he tells Nikki that the secret of the relic they're trying to craft is in the hand of her Queen. He subsequently vanishes into midair, leaving behind a hat, a rose, and a note for Nikki. The note simply says that he finds her lovelier than he had imagined. They're interrupted by sudden banging at the door of the room they're in, and they escape quickly into the night.

Out in the rainy night of Pigeon, Nikki, Momo, and Ransa discuss Noah's presence and reputation. Ransa is highly suspicious of him, but Nikki believes that they should take his advice and ask Elle about Sayet's relic. She presses Ransa more about the Iron Rose's disbandment, but Ransa maintains that they had disbanded only because they failed in their mission. Still, Nikki is determined to sneak into the capital with Momo, and Ransa does not want to leave the two of them alone, so she agrees to come with her and help her avoid detection.

Once they cross the River Varna, they encounter Sherry, another former member of the Iron Rose. She had heard that somebody broke into the monastery's classics room, and knew immediately it would have been Ransa. However, she disagrees with her actions, and insists she's loyal to the Queen. Ransa says that she can't give up as easily as Sherry, even if it means going against Elle's wishes. Nikki tries to mediate between them, and eventually has to battle Sherry in order to get past.

After the styling battle, Sherry simply tells them to "go now", and Nikki, Momo, and Ransa realize she did not intend to stop them after all. When Ransa begins to say this, Sherry tells her to shut up, but Ransa continues to explain anyways, telling her why she had decided to keep pursuing the mission. Sherry asks Nikki what her goal was, and after Nikki tells her that she's here for her friends, she gives her the mask Crow's Beak in order to help Nikki sneak into the capital.

Nikki, Ransa, and Momo attempt to find the Queen, who is most likely to be in her gardens. However, there are too many security guards around, and Nikki doesn't know her way around as well as Ransa. She decides to distract the guards and allow Ransa to leave and speak with the Queen. They agree to meet in the train station once they're done, and Nikki and Momo allow themselves to get arrested.

The guards escort them away, and Nikki assures Momo that they'll be able to find a way out, but they realize they are being taken higher up in the castle. They enter a hall with a throne of roses, and, to their surprise, Queen Elle appears in the doorway. Despite never having met Nikki before, she says to her that finally, they meet again.

The s-rank stages of the chapter do not take place after the end of the chapter, but rather after V2: 1-7 Morning washed by rain.

Nikki and Momo, while waiting for Ransa to come back, meet Tuda again. They're surprised to see him in Pigeon, considering he had last told him that he was going to go to North, but he tells them that it's a long story and that he arrived recently. He recognizes the name Ransa from her time in control of his tribe, but does not comment further on it.

Nikki and Momo see the Mayor of Moonlit City then, who had snuck out in order to let off steam and get away from her responsibilities. She's in Pigeon specifically to see the Flowering Hedge Boulevard, a street known for its wild roses blooming on both sides of the street.

Nikki and Momo then meet a girl who they had last met in Bulin Town, Lilith for a Halloween celebration. She wants them to do a favor for her, but they're still looking for Ransa, and amused, she reveals that Ransa is standing right behind them. They admit to Ransa they were worried about her since she was gone for so long. They are about to leave when the girl insists that they compete with her in return for helping to find Ransa.