V2: Chapter 2 Moonlit Escapade
Story: With the flutter of a cape in the moonlight, their adventure begins. Danger is around every corner; will Nikki be able to evade her pursuers? 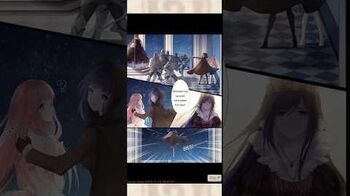 A hooded Ace stands between Nikki and the armed guards, holding her sword out. Elle faces them, holding her scepter and wearing a fierce expression.

Elle hits her staff on the ground, making a Dong sound effect. Ace points her sword out at the guards as she turns around and takes a confused Nikki by the back.

Elle doesn't respond, only watches as Ace picks up Nikki and leaps from the tower. Together, Ace, Nikki, and Momo fall; Ace smiling, Nikki fearful, and Momo crying. Behind them is the tower, the starry sky, and the full moon.