Edit
watch 02:59
Metroid Dread - The Loop
Do you like this video?
Play Sound 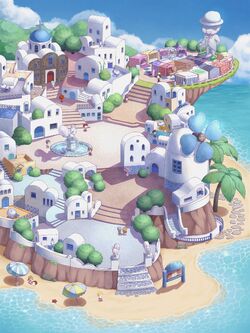 The Tea Party is the fourth chapter from Volume 1 of the story mode of Love Nikki.

Ever since they went to the Central Hospital, Momo won't start thinking about the pretty nurse. How about we collect the 'Angel in White' set to satisfy his dream?

Nikki, Momo, and Bobo arrive in Wintermount and prepare to attend the Designer's Tea Party. They meet Lunar, and prepare to help her show off her designs. They also meet a couple from Cloud, who appear to be perfect at first, until...

Nikki, Momo, and Bobo have arrived in Wintermount, the second largest city in Lilith. Bobo talks about how every year a styling competition is held here, and that Nidhogg the Prime Minister of Lilith first showed off his designing talents here. They are interrupted by a passerby girl named Orange who tells them they are being too noisy. After Nikki apologizes, Orange explains it's monsoon season in Wintermount and that they should put on clothes suitable for rainy days.

Nikki, Momo and Bobo are at the beach and Nikki is trying to convince Momo to go on the water slide. Nikki goes to get the changing room keys while Bobo teases Momo about putting a life vest on him. Bobo and Momo start to argue when Nikki comes back with the keys for her and Bobo to change into their swimsuits.

Nikki and Bobo notice Momo staring at a girl on the beach, who introduces herself as a model named Mira. Mira said she didn't expect to meet two pretty girls while she was there and they have a quick styling battle.

They decide to continue on to the Designer's Tea Party, and Bobo guides them through the Rose Garden. Nikki is awed by its size, and Momo notices a placard that honors Prime Minister Nidhogg for his achievements in design, especially his rose dress which won the first prize. While Bobo is telling Nikki that she is talented like Nidhogg too, they run into Toto, the girl who always dates from a different zodiac. Momo wryly asks if she's changed zodiac signs yet, and she reveals her next boyfriend is a Leo CEO and she wants help coming up with something to wear.

On the other side of the rose garden, Yvette timidly asks Nidhogg about his debut in the past. He tells her she can learn about these things later and that they have to go to a meeting. Meanwhile, Toto goes on her date. Nikki has her hopes up that perhaps this could be Toto's Mr Right, while Momo is cynical. Bobo, however, just wants to meet some handsome guys for them rather than talk about Toto.

Nikki, Momo, and Bobo run into Vivi again. Vivi's last job didn't suit her, so she is looking for a modeling job at the Designer's Tea Party. She asks Nikki to help her dress up to help her find a suitable job.

The group heads to Hillside Square for the Tea Party when they see Lunar again. Nikki tells her about their adventures in Cicia, and Lunar tells them that she is here to present a new design. She asks Nikki to help her compare her design against Pigeon Kingdom clothing.

Royce tries to get Neva to model his designs, except for the overly sexy ones. On the other side of the rose garden, the battle is over, and Momo suggests Nikki and Lunar team up, with Nikki doing the styling and Lunar the design. Lunar reveals her other design, a medical nurse outfit which she asked Orange to help model.

Lunar and Bobo comment how they are inspired by Nikki's styling. Nikki agrees with Momo that she is beginning to fall in love with Miraland after meeting so many people that sparked her passion, and although she doesn't know why Nanari summoned her, she would like to stay longer. Lunar models one of her own designs to compete against Nikki, the same one that she has improved on since Wheat Field.

While decorating their booth, Lunar notices a girl that looks remarkably like Nikki at the neighboring booth. Bobo and Momo also agree that the girl looks like a short-haired Nikki. The girl, Bai Jinjin from the Cloud Empire, notices their gazes and asks if they want to compete with their designer. When her companion Zhong Lizi comes with her to Nikki's booth, she and Nikki have a styling battle.

Bai Jinjin tells them she is here to model her boyfriend Zhong Lizi's clothing. They came to Wintermount to collect bridal money for Bai Jinjin, Zhong Lizi declaring he cannot let her live in poverty and that he will make her father accept their relationship. Bobo is touched by the couple's story to Momo's scathing remarks. Zhong Lizi and Lunar are up for another competition, with Bai Jinjin and Nikki still styling their designs.

Bai Jinjin goes to buy donuts for them all. Zhong Lizi takes the opportunity to ask them to compete against his costume, a bunny girl outfit he asked Mira to model, as he was afraid Bai Jinjin wouldn't want to wear it. Nikki is worried about him not telling Bai Jinjin, but Lunar also pushes her to have the contest first. Momo is the only one who saw Bai Jinjin come back for money and then run off in tears.

Bobo, Momo, and Nikki see the kindergartners having a spring outing with many snacks and desserts. The teacher Abbey invites them to come and join them. She states that they will be baking cupcakes next, and Momo asks Nikki to make him a grilled fishcake, to Bobo's disgust.

Bobo and Momo are too hungry and impatient to wait for the cupcakes to finish baking, so they order a two for one pizza with a ten minute delivery time as advertised from a leaflet Momo got. When the pizza arrives, Nikki pays for the first grilled fish pizza, but has to compete with the pizza girl Charbes to get the second pizza as listed in the fine print.

Nikki and her friends are satiated by the food, Momo in particular wanting to stay forever. Bobo reminds them that they have to go to the Designer's Tea Party to witness Nikki becoming the greatest stylist. Nikki is unsure of herself, but Bobo believes in her as she was summoned by Nanari herself, and declares that Nikki's destiny is to rebuild Miraland and free the world from Queen Elle and the Iron Rose Stylists. Abbey sees that Nikki got the second pizza, a rare sight, and asks for a battle to improve her skills.