Love Nikki-Dress UP Queen! Wiki
Register
Don't have an account?
Sign In
in: Chapters, Chapter 12 Chaos in City, Volume 1 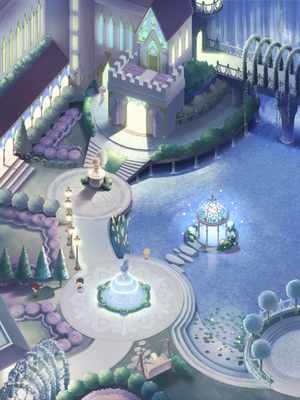 Chaos in City is the twelfth chapter in Volume 1 of the story mode in Love Nikki.

The capital has fallen into turmoil, and Nikki isn't sure of what to do. Ace calms her down and tells her that the soldiers around them are extremely well-trained, led by someone who really know what they're doing...

After fetching a distressed Momo and a terrified Bobo, Nikki and Co. sneak into the palace to see if Queen Nanari, Royce and Neva are well. Once she reaches for Royce, he explains what he knows (including the identity of the rebel leader, and how Nanari has gone missing) and tells Nikki that if she wants to help the Kingdom of Lilith, she'll have to go through several tests first. When she passes all of them (plus some unofficial ones), Nikki decides to go to the Republic of Wasteland to gather a powerful scroll that is supposed to help them in her upcoming quests.

Ace tells Nikki this is a premeditated rebellion and that Nikki should leave the city, but Nikki is unwilling to leave Bobo and Momo behind, so they head to the garden to try and find them.

Nikki and Ace reunite with Momo and Bobo. Bobo starts panicking and crying when she learns it is a rebellion, and Momo has Nikki try to cheer her up.

The group decides to find Royce and see if he knows what's going on, but Royce is detained by soldiers in the imperial bedchamber he was led to earlier. None of the soldiers belong to Lilith, and they put on clothes to sneak into the chamber.

Royce reveals that Nanari was gone when he got there and that he and Neva were immediately detained by soldiers. Royce had asked Kimi and Joe to investigate Nidhogg and now they need to head to the Imperial Gallery.

It is revealed that the Prime Minister Nidhogg is the one behind the rebellion. Royce had planned beforehand by stationing the royal army outside the city, but with all paths outside blocked they need another way to communicate with the army, which might be found in the Imperial Gallery.

At the Gallery, they find a casket that Nanari had told Royce holds the guardian spirit of Lilith. By passing the casket's three trials, one can use a phantom to send messages, like how Nanari communicated with Nikki at the start of her journey.

Royce intends to use the phantom to command the troops outside the city, and Nikki continues to pass the casket's trials.

Bobo wishes she could see the Fairytale Concerto while they were in the Imperial Gallery, and Ace tells her she heard from her friend one of the suits seemed to have a puppet theme. Meanwhile, the trials continue.

Neva thanks Nikki for her assistance while Bobo still can't believe that Nidhogg rebelled. Order is restored in the city but Nidhogg is nowhere to be found, likely returned back to the North Kingdom with Yvette. Then, the casket gives a prophecy: 'The crisis of Miraland has just begun. The Miracle Scroll of the Windvale Tribe is waiting for the Chosen One.' Believing Nikki must be the chosen one, she heads out to Wasteland with Momo, Bobo, and Ace.

The bored casket produces a duplicate test for Nikki.

The casket isn't over yet, though Momo and Bobo are unimpressed.

The casket gives out one last match.

Nikki was touched after hearing the love story of the girl who lived in abject poverty. Only love can cause flowers to bloom on cold metal...