V1: Chapter 17 Banquet of Sakura Fall
Story: Mercury Group's Chairman Reid, regardless of the audience's gaze, invited Kimi, a woman disguised as a man, to dance... in the spotlight's shadow, who has hidden conspiracy or truth? 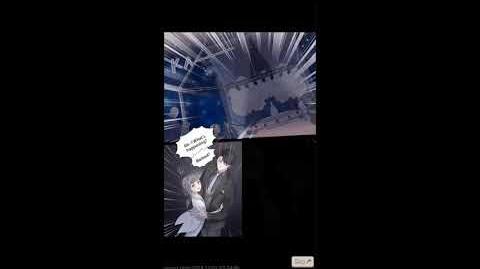 Kimi, dressed as a man with her hair tied back, and Reid dance together in the middle of the White Blossom Banquet. Nikki, Bobo, and Momo watch them in awe.

Reid spins Kimi, his hand rising to her back, and her hairband falls, releasing her long silver hair.

Reid's fingers tangle through Kimi's hair. In front of everyone, he suddenly bends down and kisses her. All eyes are on them.

He holds Kimi to his chest, her face pressed against it. She grabs at his sleeve, her face red and her eyes wide.

Reid looks down at Kimi with a smile on his face.

The spotlights turn back on, and people rush to where the White Blossom was kept. However, the mannequin is empty.

At this point in the game, the player must play against Sofia until the progress bar has filled to 50,000. After they do this, V1: 17-Side Story 1 The Lost Oracle and V1: 17-Side Story 2 The Famous 4 Noblemen?! will open, which allow the player to craft Federal Police Gun and continue the story.