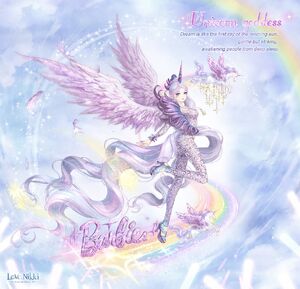 Dream is like the first ray of the morning sun, gentle but striking, awakening people from deep sleep.

Unicorn Goddess is an Apple suit that appeared in the second season of the Barbie Event. It was created as a collaboration with Barbie. It has been confirmed that this suit will not return.[1]

Grandma gave Barbie the first fairy tale book with an iridescent bowknot on it, which is Barbie's favorite color.
– Lovely Fairy Tale

Barbie has read many fairy tales, magical kittens, cute elves... but her favorite is still the legend of unicorns.
– Dream Dancing

It is said that every girl will encounter one or a few unicorns in their lives, either warm red or pure white.
– Unicorn Rhapsody

Dream is like the first ray of the morning sun, gentle but striking, awakening people from deep sleep.
– Dawn and Dream

Barbie finally met the unicorn that only belonged to her, as beautiful as rainbow.
– Colourful Life

Barbie's unicorn suit appears on the front cover of a top magazine. Her experience encourages every dream chaser.
– Speak out Your Dream

Barbie designed an iridescent unicorn suit. When she put it on and looked at the mirror, miracle happened.
– Iridescent Journey

Those innocent fairy tale dreams used to be mocked serve as the steady support for Barbie on the way to her dream.
– Power of Innocence

When Barbie first opened the fairy tale book, the beautiful fantasy world slowly unfolded in front of her.
– Beautiful Fantasy

Barbie often wondered when she could meet the unicorn that only belonged to her and what color it was.
– Sweet Encounter

Every dream is worth respecting and admiring. With unremitting efforts, the flower of dream will finally blossom.
– Flourishing Florescence

'There is no unicorn in the world.' Barbie's family and friends said, trying to break Barbie's innocent fantasy.
– Innocent Heart

The dreams hidden in every girl's heart are just like the stars in dark night, not dazzling but fairly impressive.
– Twinkling Stars

So Barbie hid her desire for a unicorn until her best friend gently encouraged her not to give up.
– Light of Hope

The hope for a unicorn hidden in Barbie's heart was rekindled. She wanted to create a unique unicorn in her way.
– Dream Wings

So she worked hard to learn design and became more and more determined to get close to her dream.
– Dream Chaser-Honey

Every girl has a fairy tale dream as lovely as rainbow deep inside their hearts and these dreams never fade away.
– Rainbow Fairy Tale

The moment Barbie put on the unicorn suit designed by herself, her overwhelming joy was beyond words.
– Ode to Fantasy 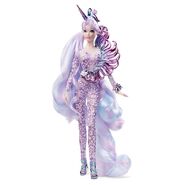 Retrieved from "https://lovenikki.fandom.com/wiki/Unicorn_Goddess?oldid=141270"
Community content is available under CC-BY-SA unless otherwise noted.