Underworld Lord is a Story Suit that can be obtained from the Ghost Gathering Event. It is a transformable suit and changes forms at 6:00 am and 6:00 pm every day.

I live in a square box, without doors or windows, and I don't know why. I have nothing but a sewing kit in my possession.

My role in this bleak world is to mend dolls.

I know what kinds of silk are the lightest, and which calico fabrics are the best, and my skill at embroidery is top-notch. When I take in these ragged, patched-up dolls and make them into exquisite work or art, the corners of their mouths curl into smiles.

But now I have a new friend, aside from my sewing kit.

The roof of my prison cracks open, and light pours in.

I look up and see strings of broken limbs and entrails falling into my cell, splattering my face with icy-cold blood.

That's what the voice tells me to do.

I want to run away, but the cold walls reign me in. Even if I cried out until my voice went hoarse, no one would come to take these things away.

I grab a doll and curl up in a corner of my prison, exhausted from crying.

I hear a sound, a slight movement.

It sounds like something is crawling on the ground, gathering it together. It makes wet, slopping noises as it does so.

I'm too scared to open my eyes, but I do and I look in the direction of the sound.

A creeping shadow, with a disfigured shape; parts of it resemble human limbs. It seems to have noticed that I'm looking at it; it convulses and begins crawling towards me.

The pieces that resemble limbs...they are making those sounds.

I cover my ears, and try to shrink into the corner as far as I can, but I can still hear it crawling towards me, closer now.

As the monster crawls towards me, some ‘limbs’ fall off, and land on the floor with a dull sound.

They craved for what to hold them together...my needlework.

‘Stay away! Don’t come any closer!’ I scream as its sounds draw even closer, and it stops.

I pull my hands from my ears and open my eyes.

It's right here, right in front of me, reaching out for my sewing kit.

Deep despair engulfs me, and I can't even make a sound. The doll in my arms suddenly moves, and gently hugs me.

The monster, my prison, the darkness…all of them are one.

I find myself huddled in the corner of a corridor. Outside is a tree in a silent courtyard, its dark leaves blocking the sun and only allowing small rays to filter through. The leaves rustle slightly in the wind.

‘You're having nightmares again, Stitch.’

But it wasn't a dream; that doll just saved me!

It's still in my arms. I look down at her; she is a little girl, dressed in a snow-white dress. She blinks her eyes playfully as she smiles at me.

But no one believes me, and think I just want more dolls.

They hand me a new doll, as well as some old, broken bolts of cloth, and tell me to mend them, to embroider them with flowers and turn them into fine clothes.

I like bright colors, but they bring me nothing but rags and old cloth.

I want to play with moving dolls, but they only give me dolls with fake, unmoving smiles.

I go to play quietly with my doll in the hallway, out of everyone's way as well as their disgust.

Later, they just locked me up in a room full of cloth and fabric.

I keep working, but the fabrics don't seem to end. It becomes more and more gloomy in the room, and the smell of dust weighs heavily on everything.

As I work, my doll dances around me noisily. She can't talk, but she can smile and laugh. When her laughter is heard outside of the room, they yell at me to stop.

But it's not me, just my little doll. I stroke my doll's long hair.

Then they scold me for no reason, and say that I'm crazy...that I'm a monster.

Eventually, there is only one voice left. It only tells me one thing.

I don't want to go back to that nightmare. I weep day and night, begging them to let me out. They remain silent, and even send exorcists to come cure me.

They keep saying that I'm a monster, that the room was full of corpses...but aren't they just dolls that they gave me?

The room is becoming crowded, I can't even roll over inside.

I suddenly realize that this isn't a room...it's a coffin.

I'm alive, but they put me in a coffin and nailed it shut. I curl up as best as I can and close my eyes, holding my doll tightly in my arms.

I hear them talking, sighing...weeping. They talk about sending me away.

I hear the sound of a horse-drawn carriage, the roar of thunder, and then a loud bang.

Then, everything went quiet except for the sound of rain.

It takes me a long time to muster up the courage to try and lift the lid.

A soft, white hand appears on my shoulder.

I don't know when the doll disappeared from my hands.

The sky booms and crackles, as if the world is falling to pieces.

All of my memories, all of my visions… they crack like the sky and fell apart like the raindrops.

I open my eyes; the world outside my dream is raining, too.

The Stitch in the coffin, the me trapped by obsession.

I lost my memories from before I died; I only kept seeking the way to extricate myself.

My return, people who were turned to monsters, and the mountain of corpses in that inescapable mansion...all of these are memories from after I died.

I catch the scent of life, surprisingly, from my body which should have long decayed.

My power is washed away by the rain, and the ghosts no longer obey me. They are all ready to devour every last bit of flesh and blood of my body.

But then, I see a girl in white. She casts off her delicate disguise, and shows her true might for the first time. The ghosts cower and shrink into the shadows before her. Embraced by the rain and the dim moonlight, she holds a parasol woven together with bones, and steps towards me.

I recognize her; she is the doll who rescued me from the coffin, and breathed life back into me.

That was the one and only way to stop me.

She will become the new master of this city, my death through resurrection acting as a stepping-stone for her ascent to power.

But her eyes are hazy, bewildered… Somehow, she looks like a real human being.

I want to hug her; I don't notice that my hands had unconsciously gone to wipe the beads of rain from her cheek.

The kid sings an old ballad: It is a ghost city, where ghosts meet, at the time of sunrise, ghosts turn humans.
– Quiet Night Poem

She's the lady of her family, a renown kind person. Countless orphans and wanderers came to her asylum.
– Lord of Underworld

Miss Stich would heal the people herself. It's said she could bring the dying back to life.
– Rebirth Song

The whole city is trembling. Dark clouds cover the sky; rain blurs the border of dream and reality.
– Underworld Fire

Ghostbuster came and tried to eliminate the monsters in the city haunted by endless hatred and resentment.
– Regret Pendant

Had Adora not come, maybe nothing would change. But here she is, in her carriage, with her beauty.
– Grudge Doll

Some left, some became silent, some disappeared. Those who stay took the job to help maintain the asylum.
– Exorcism Bracelet

The asylum has newcomers every day as if it will never be full. But nobody wonders why.
– Immortal Poem

Stich opened her eyes again, recalled and forgave everything. A flower bloomed and withered on the black coffin.
– Exorcism Coffin

This day, Stich received a gift from Adora. In a beautifully wrapped box is a delicate doll, smiling to her.
– Blood Silk Temple

She stands there with a sunshade like an innocent flower. She said she wanted to be Miss Stich's friend.
– Quiet Night Dream

After the Lord died, the mansion piled up with skeletons is revealed. On her coffin a pure flower budded.
– Nether Fairy

It's an old elusive poem: It is a ghost city, where ghosts meet, at the time of sunset, people turn to ghosts
– Quiet Night Poem

She masters the city, the night, and all the ghosts. Her power is inexhaustible and her life is eternal
– Lord of Underworld

The lord's power subdues and seduces the ghosts alike. Whoever kills her will be the new lord.
– Rebirth Song

Her immortality was finally broken. That girl in white walks to her. She somehow looks even more confused
– Underworld Fire

On the day when Adora came, she smells the blood in wind. Stich looked down at the street and saw the carriage
– Regret Pendant

She saw the ambition and greed hidden beneath the skin. Maybe this was the person she had been waiting for.
– Pearl of Exorcism

A familiar dream broke into her dark slumber. In it, she sat in a court and wind rustles the leaves
– Grudge Doll

Adora's whereabouts is well known by Stich, but she didn't expect that what came to her at last is a doll
– Exorcism Bracelet

They cannot even touch her, let alone hurting her. When they see her eyes, their soul will be nailed
– Immortal Poem

Stich reached out her hand to rub the water drops on her face. She's free now. Wish she will find her own answer
– Exorcism Coffin

The mansion of Stich is a mortal hell now. The ghosts stare at the coffin greedily but none dare to move
– Blood Silk Temple

It's a long dream inundated with mysteries and darkness, but she knows this is the ending she's looking for.
– Quiet Night Dream 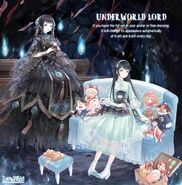 Retrieved from "https://lovenikki.fandom.com/wiki/Underworld_Lord?oldid=87206"
Community content is available under CC-BY-SA unless otherwise noted.