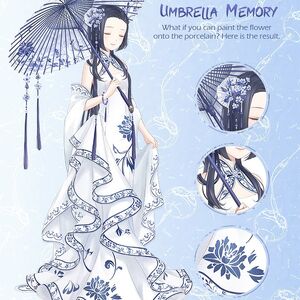 What if you can paint the flower onto the porcelain? Here is the result. 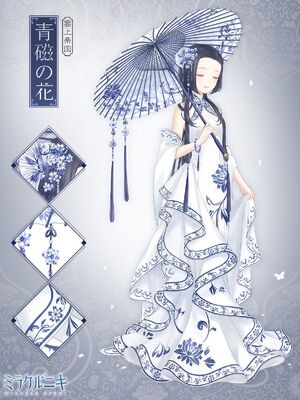 Umbrella Memory is a Cloud suit that can be obtained through the VIP 12 package.

Porcelain is the treasure of Cloud, and in the past, the patterns were carved by craftsman.
– Beauty Fragrance

What if you can paint the flower onto the porcelain. This thought lingers in Ruri's mind for years.
– Lotus Complex


Seeing that husband was troubled so much all day long, Creek decided to find the pigment herself.
– Flowers Umbrella


Three months passed and Creek didn't return. In great snow, he went into to the mountain.
– Quiet and Mild


Kiln fell and Creek's half body was under the stone, her hand still holding the material.
– Umbrella Memory


Ruri made pigment out of stones collected by Creek. And the blue finally shows on the porcelain.
– Underglaze


Years later, when people talk about chinaware, the one using rough strokes to depict a vivid woman is always mentioned.
– Glaze Refresh

In Cloud Empire, porcelain is considered a national treasure. In the past, the patterns were carved by craftsmen. Umbrella Memory tells the tale of one such named Ruri. He wanted to paint a flower onto the porcelain and the idea had lingered in his mind for years. Seeing how troubled he was, Creek—his wife—decided to find the pigment herself so that he would be able to do it.

However, three months passed and Creek didn't return. Ruri went into the great, snowy mountain to find her, and it turns out that a kiln fell over half of Creek's body, most likely killing her. She was still holding onto the material. Ruri collected the stones from her and made pigment out of them, until the blue finally started to show on the porcelain. Years later, when people talked about chinaware, his porcelain became famous, depicting a vivid woman using rough strokes.

Retrieved from "https://lovenikki.fandom.com/wiki/Umbrella_Memory?oldid=167569"
Community content is available under CC-BY-SA unless otherwise noted.