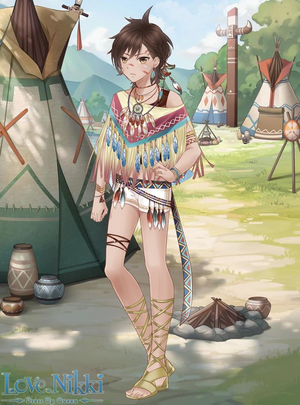 Tuda is a character in Love Nikki. He is the son of the Pota tribe's chief in the Republic of Wasteland.

Tuda is a short kid, with medium brown skin and dark brown, spiky hair. He has markings on his face that show that he is the chief's son, and he wears clothes typical of Wasteland, such as a brown shirt, a colorful shawl, and white shorts. He wears elaborate gold metal sandals.

Tuda is wary and distrustful of foreigners due to the things Ransa did to his father and him.[2] However, once he warms up to someone, he is shown to be a kind and sweet kid.[4] He is also very brave, standing up to Ransa in front of the whole tribe in defense of his beloved father.[6]

In this year, Ransa, a member of the Iron Rose Stylist Legion, came to the Pota tribe and earned the respect of the tribe's chief, Tuda's father, due to her styling skills. She quickly took the position of the archpriest of the tribe, and started to create an elixir for Tuda's father, who fell into a coma. Ransa took leadership of the tribe from that point, imprisoning Tuda.[4] This gave Tuda an apprehension towards foreign stylists.[2]

He managed to escape, and had to eat scraps of food to survive. He encountered Nikki and her friends while they were passing through Pota and visiting a restaurant.[1] He did not trust them, and they worriedly tried to get him to open up.[2] Eventually after winning his favor with styling, he explained his situation and asked for help.[4]

Nikki and Tuda decided to challenge Ransa to a styling battle over the antidote to wake up Tuda's father, and Nikki defeated Ransa.[6]

Tuda's father woke up and remarked upon how much the boy has grown up. Tuda agreed, and decided to explore the rest of Miraland, starting with North Kingdom.[7]

He later went to Oren, Pigeon, and shortly after arriving he ran into Nikki and Momo. He promised to tell them about his travels, though he warned them it was a long story.[3]

Retrieved from "https://lovenikki.fandom.com/wiki/Tuda?oldid=143758"
Community content is available under CC-BY-SA unless otherwise noted.