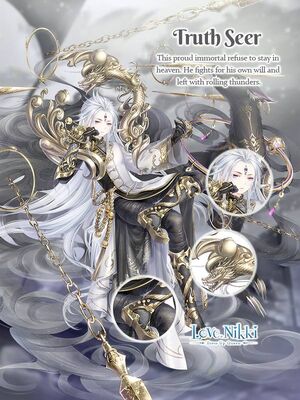 This proud immortal refuse to stay in heaven. He fights for his own will and left with rolling thunders.

Truth Seer is a Cloud suit that can be obtained from Lucky Bags.

It's said before the moon fell to a cave it shone on the white waves. He returned with hair dyed silver white.
– Phoenix on the Three Mountain

Furious voice and eyes raise waves. No sun, moon nor stars can be seen. Only rain pours, makes it hell again.
– Invincible Amour

The dragon brought disaster and it rained. He fought against it. The sky cleared and grievances disappeared.
– Attire for Riding Dragon

He fights against the evils and stops the wars. Once he stepped his boots, there always be rolling thunders.
– Dragon and Cloud Shoes

The pneuma of gold forms his weapon. It can form thousands of sharp blades to smash evil.
– Three Pointed Double-Edged Knife

The immortal dog, shaped like an elephant and dashes like an eagle. He could defeat the most fierce enemy.
– Heavenly Growl

The dragon rose with colorful clouds. The clamor of battle flowing around him. His duty is to defeat the evil.
– Riding on the Cloud

His myth was spread. People of Cloud lit a fire, hoping his powers could help them drive the darkness away.
– Small Burning Flame

After disappeared, he was said trapped and disappeared. The dark clouds are the inspection of his holy dog.
– Moon Wanes

His name can still be heard. He clears the dark clouds and disperses evil. Winter is over and spring comes.
– Sun behind Clouds

He is the god watch over the earth. His third eye can distinguish the good and evil and demons can't hide.
– Sharp Eyes from Heaven

Dragon flew out of the mountains in winter, driving away cold with might and bestow the world with peace.
– Spiritual Mountain

He came with waves and winds. The power of the universe lingered around. Dark and chaos was gone for him.
– By Cloud and Wave

This proud immortal refuse to stay in heaven. He fights for his own will and left with rolling thunders.
– Treading Holy Gate

Retrieved from "https://lovenikki.fandom.com/wiki/Truth_Seer?oldid=131953"
Community content is available under CC-BY-SA unless otherwise noted.