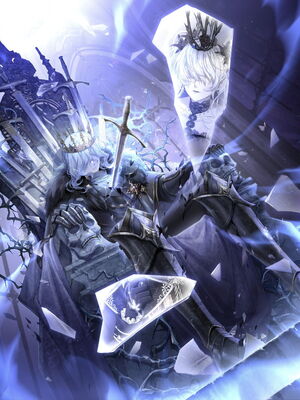 The True King, also known as The Enlightened, and born as Verner (维纳), is a character in Love Nikki. He was a figure that helped to bring about peace in Miraland during his lifetime. After his death, the Blood Curse began, a curse in the blood of those born in Miraland that prevents them from using force.

The True King repeatedly expresses the desire for peace even at the cost of the people of Miraland's personal freedoms. He believes that by bringing peace, especially through an endless sleep, he can "cure" the world.

The True King was born during this year with the name Verner.[3]

During this year, the True King, who went by the title Enlightened, took Miraland into an age of peace. The following ten years were known as the "Golden Decade", and during these years, the production of military technology and the usage of weaponry were forbidden.[3] He was admired by the monarchs of all the nations, and though he held no official power, he was considered an "uncrowned king" over all the land. According to an old poem, Miraland used to be a world of chaos and disorder before the "Golden Decade".[1]

The Enlightened was assassinated during this year, and the "Golden Decade" came to an end. He had no tomb or monument, and his descendants buried their family name. Because of this, his works became lost to the world.[3] People began to forget about him, and he eventually faded from memory altogether. However, vengeance burned painfully, and the Blood Curse began.[1]

During this year, the True King began to speak to his descendant Bobo in her head. He berated her for being unable to protect the people she cared about most, especially her parents.[7] As time passed, he began to take more and more control over her body and eventually gained the ability to talk to her all the time.[8]

After taking control of Bobo's entire body, he sent Nikki and various others around Miraland into a deep sleep. During this sleep, they had dreams of the deep ocean and about their life leading up to this point. During Nikki's dream, for which the True King is present in Bobo's body, Bobo manages to shake off his control on her enough to warn her that the king was "using the dream to control everyone".[9]

Nikki woke up and helped to also wake some of her friends that were still asleep. She then visited the Cloud Realm, a universe made up entirely of her own memories, to see her memory of Lunar. However, the True King was able to enter Nikki's Cloud Realm, still inhabiting Bobo's body, and enclosed Nikki, Momo, and her memories of her friends within a castle.[10]

He told Nikki of his plans to save the world by bringing the people of the world to "true peace" and let humanity "dream with their sins" by putting them into an eternal sleep. When Nikki accused him of being cruel, he said that war and bloodshed were crueler.[4]

Nikki and her friends put their hands together and created a bright light that dispelled all the darkness around them. The True King, though affected, told them that even if they beat him, Miraland would still be destroyed one day by a flood. Nikki, however, was insistent that hiding from pain and indulging in false happiness would make her cowardly. She then walked forward and tried to hug Bobo's body, and after some time, the True King was banished and Bobo was able to control herself again.[11] However, the Bobo in the Cloud Realm disappeared due to something affecting her in the real world, and it's possible, though not stated for certain, that the True King still holds control over her.[12]

Through Bobo's body, the True King obtained a physical form that allowed him to interact with Nikki; however, Bobo resisted his control of her for a long time. Starting in the year 680, she began to hear his voice in her head. She was in a difficult point in her life, having just realized that her mother was in danger with nothing she could do about it, and still upset over the loss of her father three years prior. However, the True King called her whiny, weak, and naive as he steadily gained more control over her.[7]

When she asked who he was, he simply told her that he was her.[8] Later while he was possessing her body and speaking to Nikki, he told her that Bobo's body was his the whole time, and that he was "the heir to the blood that flows in it".[4]

Retrieved from "https://lovenikki.fandom.com/wiki/True_King?oldid=183433"
Community content is available under CC-BY-SA unless otherwise noted.