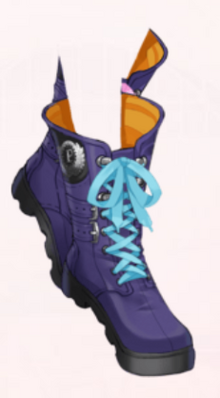 My lovely criminal vanished into night air again. He said, if I can catch him next time, he will give me a gift

Indigo boots with a black sole and gold inside. Silver accents are on the side of the boot, and one boot has light blue shoelaces, while the other has soft pink.

True Identity is part of the Apple suit Crime Buster.

There is an alternative version of this suit. It contains Special Investigator, Crime Buster, Absolute Authority, Message Receiver, The Incident, The Watching Star, Police Dog Assistant, City Under Curfew and Sky Pursuit.

Retrieved from "https://lovenikki.fandom.com/wiki/True_Identity?oldid=162938"
Community content is available under CC-BY-SA unless otherwise noted.