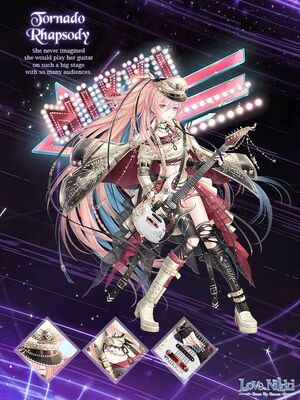 She never imagined she would play her guitar on such a big stage with so many audiences.

Tornado Rhapsody is an Apple suit that can be obtained from the Miracle Concert Event.

Karin from North plays wildly on the stage. The rough guitar swirls in the air and forms a tornado.
– Rhythm Storm

The fingers playing guitar move faster and faster, so does the music. The venue seems to be kindled!
– Raging Decibel

Out of the faith of music, Karin left her hometown and became a member of Band Miracle
– Light Faith

Karin didn't go well at the beginning, but the sincerity of Sani moved her, and they became best friends.
– Warm Friendship

There is nothing in the dark void, but the rhythm was sung repeatedly… Karin used to find inspiration in dreams
– Midnight Dream

Sometimes, Karin has to practice all night with the others. Gradually, they play like a whole.
– Glaring Pace

The girls walked together out of the same dream. Together they built a miracle beyond their own imagination
– Dream Medal

Karin's parents wanted her to be a soldier, but the love for guitar made her determined to be a musician.
– Move of Freedom

The first stroke of strings is still vivid in her memory. She loves the feel from the first time.
– Hardened String

In the huge venue, the light stickers formed a sea of stars. Their faces are vague, but the cry is deafening.
– Meteor Neon

The eyes seem peaceful usually, but when they see guitar and rock, they spit fire of love.
– Cold Fire

How can I live without music? I don't know. I only play hard as far as I can
– Tornado Rhapsody

Retrieved from "https://lovenikki.fandom.com/wiki/Tornado_Rhapsody?oldid=141283"
Community content is available under CC-BY-SA unless otherwise noted.