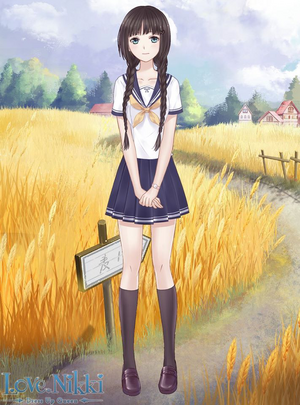 Timi is a character in Love Nikki. She is a shy, sweet schoolgirl who is among the first friendly rivals that Nikki makes in Miraland.

Timi is a tall, pale young girl with long black hair in twin braids and straightened bangs. She has cyan eyes and a shy, slightly awkward pose. She's almost always seen in schoolgirl outfits: some resemble sailor fuku, others are closer to Western school uniforms, and at least one resembles Chinese all-girls school's cheongsam-like uniforms.

As mentioned, Timi is the "shy bookworm" type of character. She is quiet and thoughtful, and quite insecure on herself despite her talent. As she becomes more self-assured thanks to Nikki, she begins to show how capable she actually is in regards to styling.

Timi has a huge crush on an older boy from her school, whom she refers to as her senior.[1] Nikki, Bobo and Momo encourage her to tell him about her feelings, and eventually she does, leading to the two of them beginning to date.[8]

She is also smart, sporty, and kind in a shy way.

At some point, Timi became friends with someone named Momika, who is apparently studying in the Cloud Empire.[9]

Nikki and Timi met in Wheat Field as Nikki searched for Mela and Timi was trying to think of how to confess to her senior, whom she crushed on but was too shy to directly talk to. Nikki agreed to help her via a fashion battle, and in exchange for it she gave her info about Mela's whereabouts.[1]

Timi turned out to be an extremely gifted stylist despite her youth, specializing in school-based designs, some simple Cloud Empire outfits, and cute dresses. She went on to participate in more formal shows, and competed in the Fantasy Styling Contest alongside Nikki, Ace and Sherry.[10][11] She also expressed interest in writing a book telling the story of her and her senior.[12]

Timi first attended a school in Wheat Field, but went on to attend Cicia Design School for advanced studies, where she graduated from.[13][14] She later began to work for the Amphithea magazine Magic Star, which is directed towards young girls. Though she lived in Apple and her senior lived in Lilith, they met up every weekend in Wheat Field.[4]

Timi had a crush on the president of the student union,[15] who was her senior in school, but was too shy to make a move for over a year.[13] She expressed the desire to "take it slow" with him.[16]

Eventually, she decided to confess to him, and on the same day she found a letter in her bag from him, showing that her feelings weren't unrequited. They went on a date in Long Street, Cloud.[8] Once she began a job working at Magic Star, they had a long-distance relationship but still managed to meet up on weekends.[4] They later went back to their alma mater, Cicia Design School, and enjoyed their memories together.[17]

Retrieved from "https://lovenikki.fandom.com/wiki/Timi?oldid=178615"
Community content is available under CC-BY-SA unless otherwise noted.