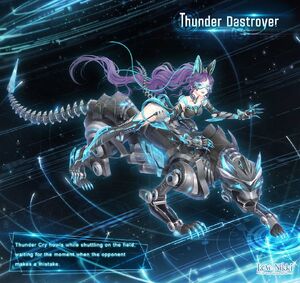 Thunder Cry howls while shuttling on the field, waiting for the moment when the opponent makes a mistake.

Thunder Destroyer is a Ruin suit that could be obtained through a Cumulative Recharge from November 5th to November 11th, 2018 for 1750

On the top of Mount Olynia, Nayer the Thunder Destroyer lurks deep in the palace, surrounded by the challengers…
– Dark Stalker

With light brighter than sunlight and howl louder than thunder, Nayer appeared with her mount Thunder Cry.
– Swift Remnant

The sharp claws shine a light of danger. Stay clear if you want to see the world's color.
– Sharp Claw


The unique beast ear headband locates the treasure precisely. Where there is treasure, there is Nayer
– Sensitive Ear


The eyes behind the goggles scan with playfulness. Even the tusk ornament seems to scorn the challengers.
– Sharp Tusk


Nayer reached her claw out and ripped the void. Within a blink, it disappeared and showed up in another position.
– Void Rip


When the steel tail swiped on the ground, the floor was shattered and debris was thrown away like bullets.
– Tail of Helix


Thunder Cry howls while shuttling on the field, waiting for the moment when the opponent makes a mistake.
– Thunder Agent


The foolhardy who covets my treasure, do you think you can escape the penalty of Thunder God!
– Rage of Thunder


Thunderclouds gradually gather, shrouding the world in a shadow. Suddenly, the penalty of Thunder God strikes down.
– In a Twinkling

Retrieved from "https://lovenikki.fandom.com/wiki/Thunder_Destroyer?oldid=161513"
Community content is available under CC-BY-SA unless otherwise noted.