Love Nikki-Dress UP Queen! Wiki
Register
Don't have an account?
Sign In
Advertisement
in: Suit, Cloud Empire Suit, The Tide,
and 4 more

The broad sea inspires her constantly. Her designs come from her memory of tide and wave.

25
The Tide is a Cloud suit that could be obtained through Evolution of princess drops in Volume 2, Chapter 3.

Kloud was born in a remote eastern island of Cloud. She grew up by the sea.
— Morning Cloud

When the weather is good, the sea is deep and calm, and when the wind rises, it turns into a furious beast.
— Sound of Ink Tide

She's curious about the other side of the sea horizon. She often looks far into the distance at the shore side.
— Clear Ripples

Whenever there are new travelers on the island, Kloud would ask them about the world beyond the sea.
— Silver Wave Hairpin

As she grows up, she becomes more curious about the outside world. She is all ready to leave the island.
— Flowing Sun Glow

Her parents told her that the city looks great, but it's actually dirty and crowded and people are complicated.
— Morning Cloud - Rare

Kloud hesitated. Her reason asked her to obey her parents, but her heart was saying differently.
— Sound of Ink Tide - Rare

One day she watched a documentary about the Lilith Kingdom and she knew it's the paradise of designers.
— Clear Ripples - Rare

Kloud was fascinated by the Lilith Kingdom. She decides to go there alone to pursue her dreams.
— Silver Wave Hairpin - Rare

Lilith is a place full of opportunities and challenges. Kloud decided to be a stylist and promote Cloud Sea culture.
— Morning Cloud - Epic

The vast sea brings her countless ideas. The tides and waves in the memory decorate the clothes she designs.
— Sound of Ink Tide - Epic

It's not an easy thing to find a foothold in the big city. The road ahead is full of unknown challenges.
— Clear Ripples - Epic

She finally gained some fame after a long time of hard work. Her new Cloud work 'The Tide' becomes a hit.
— Silver Wave Hairpin - Epic

Her hometown becomes a popular scenic spot for her. The remote island is very bustling now.
— Flowing Sun Glow - Epic

The sea is not always blue. Just like the sky, it changes colors and full of possibilities.
— Sparkling Green Sea

As a child, she used to collect shells at the seaside. She hid her little secrets in these shells.
— Clear Ripples - Epic (Purple)

The sunset sprinkles gold foils onto the sea. On the horizon, even the clouds have golden linings.
— Sound of Sunset Sea

Put a conch to the ear and you will hear the tides. Kloud believes there is a little sea in every conch.
— Clear Ripples - Epic (Light Yellow)

In the morning, clouds suspend still on the horizon. They are like long catkins floating above the sea.
— Sound of Green Tide

Shells are both beautiful and versatile. They can be made into pretty art wares like wind bell.
— Clear Ripples - Blue

The Tide is about Kloud, a girl born in a remote eastern island of Cloud Empire. Having grown up by the sea, she is familiar with how it behaves, like when the weather is good, the sea is calm, and when the wind rises, it turns into a furious beast. In the suit, "mirages" are also described to sometimes appear above the sea, e.g. the sky and the sea shifting color, sunsets sprinkling gold foils and gold linings onto the surface and the clouds, and clouds hanging still like long catkins in the morning. She believed that these mirages were a gift from the sea. As a child, she used to collect seashells by the seaside, hiding her little secrets inside them. Because of their beauty and versatility, they could be used to create art wares such as wind bells. She believed that every conch contained a little sea, because when you put it close to your ear, you can hear the sound of tides.

Trying to look far into the distance at the seashore, Kloud was always curious what lied beyond the horizon. Whenever new travelers came to the island, she would ask them about the world beyond the sea. She grew more and more curious about the outside world as she grew up, and while her parents told her about how great the city looked, they explained how dirty, crowded and problematic people could be in actuality. Kloud was therefore hesitant; her reasonable side told her to obey her parents, but her heart said otherwise. One day, however, she watched a documentary about Lilith Kingdom. She knew that it was the paradise for designers, but even so, she was fascinated and thus decided to go there alone to pursue her dream.

Arriving at the capital of Lilith, Royal City, Kloud was stunned by the various culture that clashed and merged there. Lilith was a place full of opportunities and unknown challenges, and while it was not easy to find a foothold in the big city, the vast sea of her childhood brought her countless ideas. She decided to be both a stylist and a designer who promoted Cloud Sea culture. The tides and the waves in her memory decorated the clothes she designed, and after a long time of hard work, she finally gained some fame: her new Cloud work The Tide became a hit.

For herself, Kloud's hometown was a popular scenic spot. It can assumed the reason why the remote island became so bustling was because of her renown. The beach sand over there was perfect to build sand castles, and the suit attributes the ingenious islanders for inventing the art of sand sculptures. 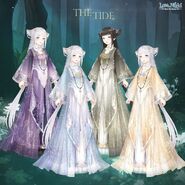 The suit and its customized versions

The Base and Rare versions of the suit.