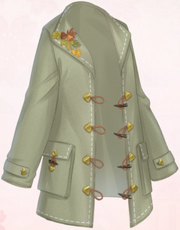 His body and will are both breakable.

The Golden Autumn is part of the Apple suit Alumni Ace.

There is an alternative version of the suit. It contains Rapid Short Hair, Alumni Ace, King's Honor, Wild Warrior, Nikki Rugby and Invincible.

Retrieved from "https://lovenikki.fandom.com/wiki/The_Golden_Autumn?oldid=102938"
Community content is available under CC-BY-SA unless otherwise noted.