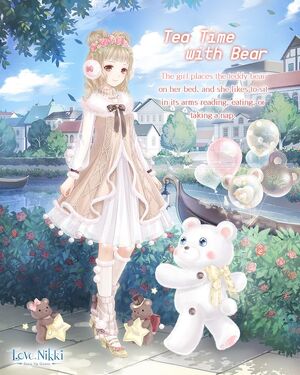 The girl places the teddy bear on her bed, and she likes to sit in its arms reading, eating, or taking a nap.

Bobo's Dreamland, Parting in the Snow

Tea Time with Bear is a Hidden Suit that can be obtained from Bobo's Dreamland, Parting in the Snow.

In a snowy day, the late-returned father sent his little girl a teddy bear with golden curls and glass pupils.
– Golden Hug Bear

The girl places the teddy bear on her bed, and she likes to sit in its arms reading, eating, or taking a nap.
– Tea Time with Bear

In a dream, some little bears in suits send the little girl a bunch of roses and invite her to join a party.
– Little Bear Socks

After a dance, a little bear brings the girl some dessert. 'Was it you send me the invitation?' 'Nope!'
– Snowball Mousse

In the dream, the girl dances with a little bear in a rose manor. Roses and the snowflakes smell like candies.
– Waltz of Rose

The ball is over. The little bear took the girl's hand and walk her to the door of the Rose Manor.
– Rose Hairband

The girl turns over in her dream and the night is not over. The hug bear in her pillow is guarding her dreams.
– Warm Winter

The suit is about a girl who was given a stuffed bear by her father. She had a dream about bears inviting her to a tea party, where she danced in a manor called the Rose Manor and had dessert. When she asked one of the bears there if he had sent her the invitation, it simply said "nope!" After the ball was over, the bear took her hand and walked her to the door of the manor. It's said at the end that the bear was guarding her dreams.

The story is a reference to the Dream Weaver path the suit comes from, Parting in the Snow, where Bobo was given a bear by her father.

Retrieved from "https://lovenikki.fandom.com/wiki/Tea_Time_with_Bear?oldid=132408"
Community content is available under CC-BY-SA unless otherwise noted.