Countless people devote their life to researching the secret of stars, which might be traces left by the Goddess.

Tales of Starry Night is a Pigeon suit that appeared in a Cumulative Recharge December 15th to the 31st, 2018, for 6,300

On the fountain square, bard plays the lute, singing a legend nobody knows.
– Starry Legend

It's said that, long long ago, the night is in complete darkness, until the presence of Goddess Shemmir.
– Night Star Light


When the light suddenly breaks the silence of night sky, it's like a baby first opens eyes.
– Starry Road


There is a city of light in the remote sky. Somebody says it's where Goddess Shemmir dwells.
– Star's Crown


In the beginning, stars drifted randomly in the sky, then they became more and formed milky way.
– Birth of Galaxy


Countless people devote their life to researching the secret of stars, which might be traces left by the Goddess.
– Enlightening Star


Light flies from her eyes, lighting up the dark night, yet she was unable to see anymore.
– Star Goddess


Time is late and people gradually leave, leaving the stars shining in the fountain, just like the dress of Goddess.
– Praise to Star

Tales of Starry Night is about Goddess Shemmir, an obscure deity associated with stars and light. It was said that long, long ago, night was shrouded in complete darkness, until Goddess Shemmir was present. In the beginning, stars drifted randomly in the sky until they accumulated and formed the Milky Way. Even though light flies out of her eyes and lights up the night, she is actually blind. She can however summon butterflies up to the sky by raising her hand. It is said that there is a city of light in the remote sky, and that it is there the Goddess dwells.

At the fountain square, a bard playing flute sings her legend, which is unbeknownst by everyone. Even though countless of people devote their lives researching the secrets of the stars, it might actually be traces left by the Goddess. As time got late, people gradually left the fountain, leaving the stars shining upon it—just like her dress. 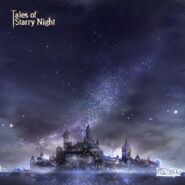 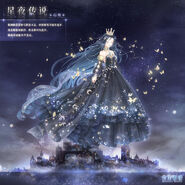