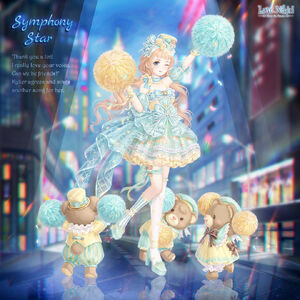 'Thank you a lot! I really love your voice. Can we be friends?' Kylier agrees and sings another song for her.

Symphony Star is a Lilith suit that could be obtained via a direct Recharge of $4.99 USD or more.

There is a special city in Miraland. It's a city where thrilling matches never stop.
– Elegant Prelude

This unprecedented event saw the arrival of hundreds of players and also countless cheerleaders and bands.
– Starry Travel

Kylier was a born cheerleader. She was the cheerleader of the biggest unlimited race event when she 15. [sic]
– Shiny Race Course

As the match starts, Kylier follows the players on the airship. The music changes to the tempo of the race.
– Mini Adventure

A sudden airflow came and countless balloons made a roadblock. It's a crucial moment that demands a quick reaction!
– Azure Voyage

Kylier doesn't fear it at all. Her pilot is most experienced and they dodged the balloons with a few moves.
– Kaleidoscopic World

Seeing players rush to the first checkpoint, Kylier directs the airship pilot to charge at full speed.
– Prespect of Victory

Her song doesn't forget those who are left behind. By the devices on the other airships, her voice cheers for them.
– Golden Voice

Kylier's voice and the grand symphony of the orchestra infuse the match with a special force.
– Tomorrow Yearning

Akala, a local female player, is at the foremost front on her streamlined black motorbike.
– Tide Trek

As Akala dashes across the finish line, the whole city cheers for her. Her face is on every screen on the street.
– Final Bloom

In the sea breeze, the match comes to the end. Akala politely turns down groups of reporters and goes to Kylier.
– Baby Bear Symphony

'Thank you a lot! I really love your voice. Can we be friends?' Kylier agrees and sings another song for her.
– Victorious Song

In a city special city in Miraland—where thrilling matches are said to never stop—was Kylier, a cheerleader. She was practically born into her role, having been the cheerleader of the biggest unlimited racing event in the city when she was only 15.

This time, the event was unprecedented but saw the arrival of hundreds of players and with that, countless of cheerleaders and bands. Naturally, Kylier was one of them, and as the match started, she followed all the players by airship, cheering on them through music. Her voice and the grand symphony of the orchestra infused the match with a special force, and the music changed accordingly to the tempo of the race. Upon seeing the players rush to the first checkpoint, Kylier directed the airship pilot to charge at full speed. However, with the airship comes challenges of its own, like roadblocks created by sudden airflows and countless of balloons. However, Kylier didn't fear that at all, because her pilot was most experienced. During those crucial moments, which demanded quick reactions, the pilot dodged the balloons with a few moves! And throughout all this, Kylier's song never forget those who are left behind, as there are devices on other airships to pass her cheers on.

At the forefront with her streamlined black motorbike was Akala, a local female player. As she dashed across the finish line, the whole city cheered for her. Her face was on every screen on the street. Thus, in the sea breeze, the match came to an end. She politely turned down groups of reporters approaching her and instead went to Kylier, saying "Thank you a lot! I really love your voice. Can we be friends?" in which Kylier agreed to. She then sang another song for her. 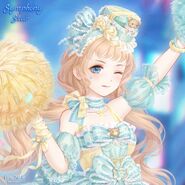 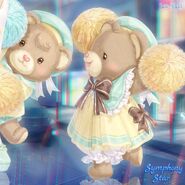 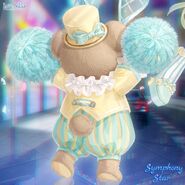 Retrieved from "https://lovenikki.fandom.com/wiki/Symphony_Star?oldid=145808"
Community content is available under CC-BY-SA unless otherwise noted.