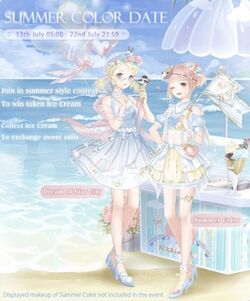 The Summer has come and the tour of December Troupe has started. The concert Summer of Star City starred by Stacy is going on.

Players will be shown two outfits and a styling theme. Choose the outfit you think would score better for the theme to gain Ice Cream

for pieces of the Summer Color and Dream of Star City suits. 5

will be rewarded for choosing correctly and 3

will be given for choosing the wrong outfit. 10 free attempts are given every day and more attempts can be bought for 20

Note: Scores are based on attributes.

Retrieved from "https://lovenikki.fandom.com/wiki/Summer_Color_Date?oldid=106406"
Community content is available under CC-BY-SA unless otherwise noted.