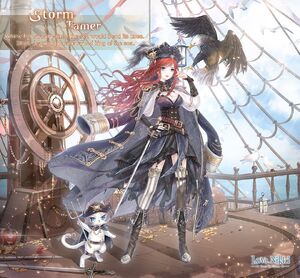 Where her sword points, the sea would bend its knee. She's Jeanne, the uncrowned king of the sea.

Storm Tamer is a Pigeon suit that could be obtained from the Sail of Hunt, Sea of Joy Event and can now be obtained through Recipe Crafting.

After sunset, Jeanne stood on the deck, her red hair fluttering in the wind like the afterglow.
– Rose Rum

The sea is a natural battlefield. Flags were raised, cannons fired, and she always wins.
– Invincible Legend

She inherited the coat and the Dionysus from her father. On that day, the whole sea bends its knees to the new lord.
– Sea Cruiser

Different from a long blade for battle, a dagger is easy to carry and handy to cut a rope.
– Sailor's Dagger

The prow splits the furious torrents like a strong spirit being poured into the storm.
– Storm Symphony

She has a cat named Poseidon and the prow of Dionysus was carved in its shape.
– Son of Poseidon

When the day is clear, you may see a hawk flying above. It's her loyal companion and her vigilant scout.
– Black Predator

The heavy captain hat is a symbol of the power of responsibility.
– Pride and Honor

What she pursues is not power, but the sea and adventure. She will hand what she has over to the next warrior.
– Free Shark

Where her sword points, the sea would bend its knee. She's Jeanne, the uncrowned king of the sea.
– Uncrowned Master

With the sword of supreme power in hand, she bears a heart of equity.
– Spirit of Contract

The suit represents Jeanne, the uncrowned king of the sea. She inherited her coat and her ship, Dionysus, from her father. Jeanne is brave in the face of danger, responsible, and she pursues sea and adventure rather than power. She also has a cat named Poseidon and a companion hawk that can sometimes be seen flying above her.

Retrieved from "https://lovenikki.fandom.com/wiki/Storm_Tamer?oldid=132104"
Community content is available under CC-BY-SA unless otherwise noted.