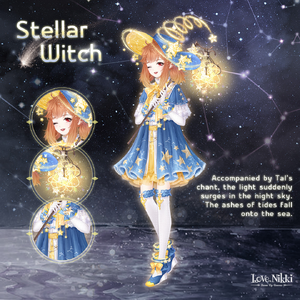 Accompanied by Tal's chant, the light suddenly surges in the night sky. The ashes of tides fall onto the sea.

Stellar Sea is at the end of the land. When day and night shift, there will be disastrous magic tides.
– Sea of Stars

The most powerful wizards are sent to solve the problem, but none of them could even get close.
– Wind Beacon

Until one day when Tal shows up in Stellar Sea like a shooting star. People see her figure in binoculars.
– Sound of Tide

Tal dances agilely on the steps of waves. The formless magic tides are like breezes blowing gently.
– Tide Dawn

Starlight shoots out of Tal's wand. It spins and circles her, making her the most shining star.
– Flashy Stars

Accompanied by Tal's chant, the light suddenly surges in the night sky. The ashes of tides fall onto the sea.
– Chanting Witch

Tal waves the stardust wand and the chaotic magic waves are turned into a majestic magic symphony.
– Golden Star Dust

Since then, whenever there are magic tides, the great witch Tal will show up and stages a great concert.
– Starry Witch

Retrieved from "https://lovenikki.fandom.com/wiki/Stellar_Witch?oldid=134036"
Community content is available under CC-BY-SA unless otherwise noted.